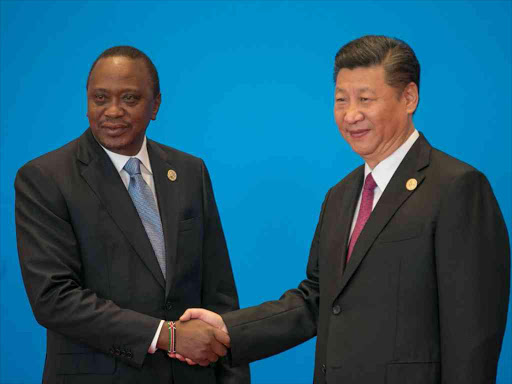 President Uhuru Kenyatta with China's Xi JInping before the start of the Belt and Road Forum for International Cooperation leaders round-table meeting, May 15, 2017. /PSCU

from China to extend SGR from Naivasha to Kisumu.

Uhuru secured the amount that will be available immediately at a

“The President wants the railway to reach Kisumu then Malaba especially because of the new port that is being built [there],” said State House Spokesman Manoa Esipisu.

Before flying to China, Uhuru had phone conversations with Uganda’s Yoweri Museveni and Rwanda’s Paul Kagame on the possibility of the two countries extending the railway all the way to Kigali.

As a result, the three countries will send a joint team to Beijing to bid for more funding for SGR to reach Malaba and go on to Kampala and then Kigali.

After the launch of the railway line from Mombasa to Nairobi at the end of May, the Chinese government will provide special security while building

the capacity of Kenyans who will take over.

At the moment there are different groups of young Kenyans being trained in various institutions in China on running the railway and its various components.

the National Environment Tribunal ordered the contractor to suspend all activities on the Sh63 billion phase 2A of the SGR project.

They say the EIA was conducted hurriedly, without any consultation and in total disregard of procedural and legal requirements.

Esipisu said the President also secured $161 million dollars for the western by-pass whose work is set to begin in the next few weeks.

“This project will complete the missing links and is part of the wider plan to decongest Nairobi,” said Transport Cabinet Secretary James Macharia who accompanied Uhuru to Beijing for the Belt and Road Forum.

The western bypass will run from Ruiru to Nakuru-Nairobi highway.

Kenya, like all the other 67 countries involved in the project, will have to pitch for funds for various infrastructure projects from the initiative.

Uhuru said Kenya and Africa will benefit more if China transfers skills and set up manufacturing companies in the continent.

He said this will be better than the donor providing cash and using its nationals for the massive projects.

"It will be a win-win situation when our people have the skills, assets and financing necessary to participate in the development projects," the President said.

He went to China after his work tour of London, UK, where he .

Infrastructure corridors that will enhance connectivity, support trade and reduce the cost of doing business between countries are envisioned in the project.

"This will secure the good jobs we all want and protect us all from the burden of imprudent debt," Uhuru told

27 presidents attending the Belt and Road Initiative launched by China in 2013.

But some western diplomats have expressed unease about both the summit and the plan as a whole, seeing them at attempts to promote China's influence globally.

They are also concerned about transparency and access for foreign firms to the scheme.

Jinping has touted his ambitious Silk Road plan as a new way to boost global development.

He says the billions of dollars in infrastructure investment will also expand links between Asia, Africa, and Europe and beyond.

He said the countries that have come together are likely to ensure financial integration and tighter people-to-people bonds for prosperity.

The President said Kenya agreed to join the China initiative because both countries share a deep historical bond which started in the 15th Century.

This was after the visit by senior China leader Admiral Zheng to the Kenyan Coast.

"The Belt and Road initiative gives our continent the opportunity to make a paradigm shift. Post-colonial Africa has been stuck in a rut," Uhuru said.

The continent, he said, must move from being mere consumers of imports of finished products to exporters of basic commodities and materials.

"This will lead to quality jobs and prosperity for millions of our youth," he said. "We will all win when our people have access to the technology they need to add value to our continent’s wealth of resources."

He added that such value addition is key to the fair and unimpeded trade that benefits all the nations involved in the venture.

"Never before has a single generation of leaders had the power to form global partnerships that could transform the entire planet," he said. "We have it within our power to forge these partnerships. Let us travel together."