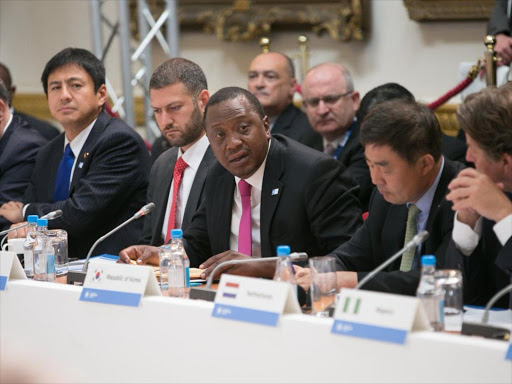 President Uhuru Kenyatta during the Somalia Conference in London, May 11, 2017. /PSCU

President Uhuru Kenyatta on Thursday said Somalia will get on a firm growth trajectory if AMISOM is beefed up.

He said the return of the Horn of Africa country's people to their homeland remains a key plank to achieving this.

At the London Somalia Conference, Uhuru said more needs to be done before a planned AMISOM drawdown, and transition to Somali security forces next year.

He said the troops have made significant progress in degrading terrorist activities and stabilising Somalia.

"I therefore urge this conference to endorse the call by the troop-contributing countries and the African Union for urgent measures to support and strengthen AMISOM," he said.

"This should include the upsurge of AMISOM by an additional 4,000 troops to liberate areas still under the control of terrorists.

The international community should also facilitate the deployment of critical enablers and force multipliers."

He also pushed for the provision of predictable and sustainable funding, including from the United Nations assessed contributions.

Uhuru called for the provision of UN support to the Somalia security forces in order to accelerate the AMISOM exit strategy.

He sought support for the implementation of the Somalia National Development Plan to enable the people of Somalia, including refugees, to go back home.

The President also echoed his sentiments to Kenyan media on Tuesday, ahead of the London visit, saying AMISOM could not be expected to exit Somalia before guaranteeing the region’s security.

"For us, the return of the people of Somalia, including repatriation of refugees has to be embraced as part of measures of bringing meaningful peace and security, as well as securing the development of Somalia," he said.

"Somalia is taking important steps to democratisation and peace, but an important fact to be embraced is that it has to take the involvement of all the people of Somalia to deliver stability, reconstruction, and progress."

The President met Prime Minister May earlier on Thursday to discuss bilateral matters.

The meeting was part of a frenetic month of May in which the President is holding talks with a host of global leaders on deepening investment and expanding trade – key to his agenda of seeking quality jobs for Kenyans.

On Tuesday, he asked the United Nations to do more to find resources to support AMISOM, which has faced financial challenges especially after the European Union decided to cut its budget to the African mission by as much as 20 per cent.

Kenya, Uganda, Ethiopia, Burundi and Djibouti have sent troops in Somalia as part of regional efforts to secure and guarantee peace.

The country’s other reason for deployment is to combat terrorism.

The President urged organisers of the London conference to give the African Union and regional development agency IGAD a prominent role in tackling the challenges in Somalia.

He said this is because they have dealt with the matter over a couple of years and have the continent’s mandate in seeking peace in Somalia.

In President Abdullahi Mohamed, regional leaders said they have a partner who is committed to fighting terrorism and deepen peace in Somalia.

Uhuru also called for more financial support to end the civil war that has killed millions of people and ensure the peaceful resolution of the crisis in South Sudan.

"Priority should be given to the creation of corridors to deliver humanitarian assistance, enabling the safe passage of humanitarian workers, and putting in place measures to guarantee the safety and security of civilians."

The President was due to separately meet and hold talks with UN Secretary-General Guterres; Somalia President Mohamed Abdullahi and Ugandan President Yoweri Museveni.

The three are all key players in efforts to bring a durable solution to the Somalia crisis.