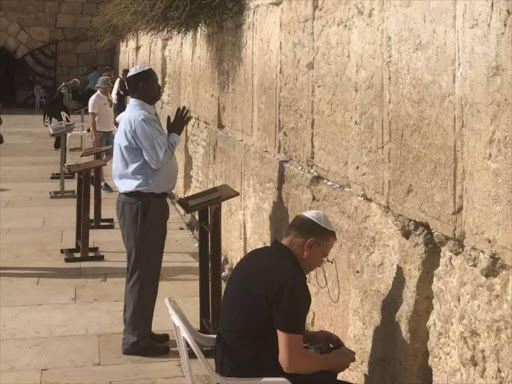 NASA flag bearer Raila Odinga was on Wednesday spotted 'walking in the footsteps of the Biblical Joshua'.

When Raila was named Opposition presidential candidate, he said he would be the Joshua who would deliver Kenyans from their hardships.

He and his running mate Kalonzo Musyoka (Wiper) will face President Uhuru Kenyatta and DP William Ruto of Jubilee Party at the ballot.

In pictures doing the rounds on social media, Raila is seen praying at Israel's Wailing Wall,

wearing a Kippah and

A kippah can be worn conveniently under a street hat, as was the custom for most Jews in the first half of the 20th century.

The Western Wall, or Wailing Wall, is the most religious site in the world for the Jewish people.

It is located in the Old City of Jerusalem and

is the western support wall of the Temple Mount.

Thousands of people journey to the wall every year to visit and recite prayers.

These prayers are either spoken or written down and placed in the cracks of the wall.

The wall is divided into two sections, one area for males and the other for females.

Via Twitter on Wednesday, Raila wrote: "Few know my history with this Holy Site. The Western Wall is the pulpit of the Temple of Solomon and is said to have been built over 5,000 years ago. The site is sacred to all three Abrahamic religions - Judaism, Islam and Christianity - and to me it is a very strong symbolism of strength and unity. The story goes that you write your wish on a piece of paper, stick it on the wall and say a prayer and the message goes directly to God."

The ODM leader said he began the tradition of writing his wishes while he was in detention, as it is a "miserable place with time mostly spent alone".

Raila was detained for six years without trial over a failed 1982 coup against the then President Daniel Moi. He was charged with treason. Before this he had been on house arrest for seven months.

NASA flag bearer Raila Odinga inserts a note with his wishes into the Wailing Wall in Israel. /COURTESY

Raila said he spent 23 hours a day alone and that at the time, it would take six months for he and family to exchange letters.

"With a lot of time on my hands, I used to write down the many wishes I had for the people of Kenya. Every time I visit, I take one of those wishes and place it on the wall."

Raila wants to make life better for Kenyans, primarily by improving the economy and ending corruption.

While on the tour, he has called for a peaceful and fair election to prevent the bloodshed that arose after the 2007 vote, whose results he disputed.

who travelled to Israel on Sunday, delivered an address the next day on democratisation, religion and the pursuit of peace in Africa at the Truman Institute.