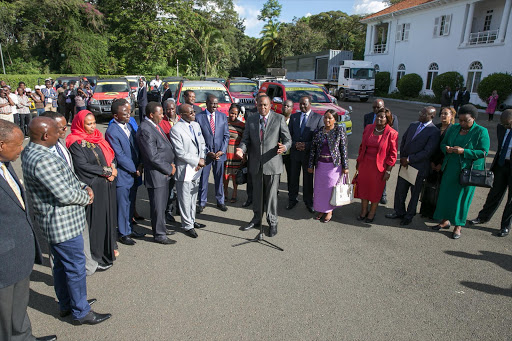 President Uhuru Kenyatta and Deputy President William Ruto with Jubilee supporters from Ukambani at State House, Nairobi on May 9, 2017/PSCU

Jubilee has contracted the services of global data mining company Cambridge Analytica in the run-up to the August presidential election.

The party will also use the British PR firm BTP Advisers that successfully managed the TNA campaign that brought President Uhuru Kenyatta to power in 2013.

Cambridge Analytica is credited with helping President Trump to win the American presidential election last November and with helping the Leave side to win in the Brexit referendum in the UK last June.

It has been described as a "psychological warfare firm".

An expose by the Guardian this week claimed that CA, in conjunction with its sister company AggregateIQ in Vancouver, Canada, essentially won the Brexit vote by trawling Facebook and buying up commercial consumer datasets to identify 'persuadable' voters whom it then bombarded with more than a billion social media posts and adverts.

“It was like working for MI6. Only it’s MI6 for hire," a former employee told the Guardian.

AggregateIQ was paid £4.7 million (Sh705 million) for its work on Brexit, possibly a breach of campaign finance rules in the UK.

Cambridge Analytica did the same work for Trump in the 2016 campaign, which he won with a margin of just 70,000 votes in three key swing states. Without CA, he might well have lost.

The CA website says it is a "global leader in data-driven campaigning with over 25 years of experience, supporting more than 100 campaigns across five continents". Besides Kenya, those countries include Russia, Lithuania, Latvia, Ukraine, Iran and Moldova.

"Within the United States alone, we have played a pivotal role in winning presidential races, as well as congressional and senatorial elections," CA says.

If CA does the same work in Kenya for this election, it can be expected to pay Facebook and other third-party data companies for information about Kenya's undecided voters whom it will then bombard with social media posts and adverts.

A small CA team arrived in Kenya at the weekend to find out what voters believe the Jubilee administration should have done and what it should do, according to well-placed sources in the Office of the President.

The CA team will work closely with BTP Advisers, which has already started campaign planning. Its staff have been coming in and out of Kenya for some time.

BTP played a major role in Uhuru's 2013 win. The firm helped to conceptualise the now-defunct TNA, before its launch in May 2012.

popularise the Jubilee agenda before the grand launch of the Uhuru campaign.

Fresh details have now emerged on how the Jubilee presidential campaign teams have been subdivided.

Resource Mobilisation is led by Equity chairman Peter Munga who reportedly has already managed to "have enough money" for the campaign.

The Logistics team and the Central Command Centre will be directly supervised by Uhuru's younger brother Muhoho and their maternal uncle and former KAA boss George Muhoho.

Civil servants have been instructed by the President to desist from campaigning but CSs have the leeway to explain how their ministries have implemented the Jubilee manifesto.

Every one of Kenya's 290 constituencies will have a Jubilee coordinator assisted by four officials. They will

answer to a regional coordinator. Polling station teams will be recruited online.

Each county identified as a 'Jubilee zone' will be assigned at least one campaign vehicle and more towards August 8.

Aspirants who won nominations in the just-concluded Jubilee primaries will be expected to campaign for Uhuru in their home areas.

A deal has been offered to nomination losers to stick with Jubilee and be rewarded with state jobs after the election.

On Saturday when Uhuru was unveiled as the JP presidential flagbearer, he called on aspirants and party members to campaign for him, as well as for themselves.

"You have been given tickets, I ask you to be my campaigners and, God willing, we will form the next government again", he said.