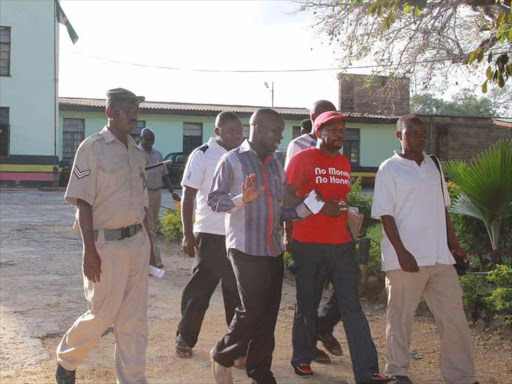 Several police agencies have declared they are not after Nairobi Senator and Jubilee governor aspirant Mike Sonko.

They said so on Wednesday after

a letter reportedly issued by a Mombasa chief magistrate on arrest warrants was shared on social media.

The authorities however revealed that the flamboyant MP escaped from Shimo la Tewa prison in 1998 but was re-arrested in 1999.

The Star established the facility that Sonko was arrested late in 1997 and escaped in 1998 to attend the burial of his mother Saumu Mukami.

The April 21 letter, indicating pending arrest warrants on Sonko, was signed by one A Abubakar, the chief magistrate in charge of the criminal registry.

This was in response to

a letter to William Kenga and Advocates through reference number KC/CMCC NO2309/2012 dated April 11.

He indicated two of the files were being traced and that a warrant had been issued concerning them.

“An exercise is going on to trace all requested files. Sorry for any inconvenience caused," the letter read in part.

But police spokesperson George Kinoti told The Star that reports of a pursuit of Sonko were propaganda.

"We are the ones who would spearhead this if the warrants were in force. No one is after Sonko," he said.

Investigating officer Munga Nyale, who was then the officer in charge of the Flying Squad, also told The Star by phone that there was no case against Sonko.

“We investigated his case with various police agencies but did not find anything. The court ruled in his favour," said Nyale, who is now head of the Anti-Terrorism Police Unit.

Kenya Prisons Commissioner General Isaiah Osugo said Sonko would not have been released from Kamiti had there been any other case against him.

“There’s no way a criminal can be set free while he has several cases," he said.

Ruwa Mwaruwa, who was with Sonko at Shimo la Tewa, said he was a businessman who only escaped from prison because his mother died.

On claims that police are after Sonko, he said: "Those are just kicks of some dying politicians. I was with Sonko in prison. He was re-arrested, charged and acquitted."