What Percentage of County Revenue Comes from their Own Collections? 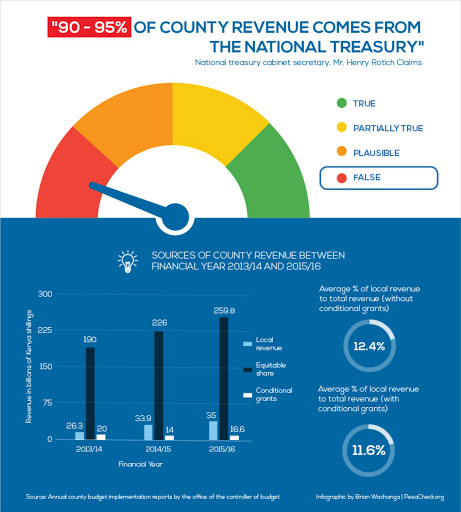 Speaking during the legislative summit in Mombasa, National Treasury Cabinet Secretary Henry Rotich claimed that of county revenues come from the national treasury, saying this is the reason why fiscal accountability is very weak at the counties.

The Deputy Controller of Budget Stephen Masha echoed the same point when he said that only 10 per cent of total revenue available to counties comes from their own collections.

has fact-checked these claims with the input of and finds them to be false.

The budget implementation reports by the Office of the Controller of Budget contain the information on the amount of local revenue that the county governments collect every financial year.

The revenue allocations for the county governments, inclusive of both the equitable share and the conditional grants, are obtained from the,, and the.

We have compared the percentage of local revenue to the total revenue both inclusive and exclusive of conditional grants in order to get a more realistic view.

The conditional grants are additional sources of revenue for the county governments from the national government’s share of revenue.

Percentage of local revenue to total revenue (without conditional grants)

For the 2013/14, 2014/15 and 2015/16 financial years, we see that the county governments managed to raise KSh26.3 billion, KSh33.9 billion and KSh35 billion respectively in local revenue. When compared to the total amount of revenue, which is inclusive of the equitable share, the percentage of the local revenue to the total revenue is 12.2 per cent, 13 per cent and 11.9 per cent respectively for each of the three financial years.

However, it is important to note that, despite the increase in local revenue collected by the counties, the share of county revenue in relation to total revenue is decreasing. This is because the county equitable share is increasing faster than the counties own revenue. This means that the counties are becoming more dependent over time on the money received from the national government as a share of their total resources.

, co-founded by ,is East Africa’s first fact-checking initiative. It seeks to help the public separate fact from fiction in public pronouncements about the numbers that shape our world, with a special emphasis on pronouncements about public finances that shape government’s delivery of so-called ‘Sustainable Development Goals’ or SDG public services, such as healthcare, rural development and access to water / sanitation. PesaCheck also tests the accuracy of media reportage. To find out more about the project, visit .