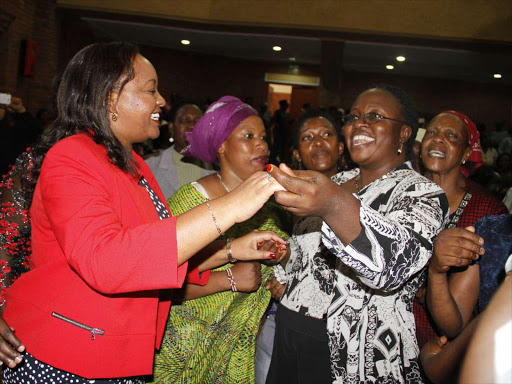 Waiguru garnered 100,632 votes while her opponent Joseph Gitari had

Incumbent Governor Joseph Ndathi who sought to defend his seat got 17, 085.

Waiguru is the second woman to sail through the nominations to fight it out for the governorship.

Provisional results show that Waiguru is leading with 47,846, followed by Kirinyaga Central MP Joseph Gitari with 38,353.

Incumbent Joseph Ndati comes in a distant third with 9,655. Early results from agents had shown Waiguru with over 100,000 votes.

But she said on Tuesday, "The officers have taken way too much time giving us results for Gichugu and earlier on Mwea constituencies and we see this as a bid to reduce my votes while at the same time increase those of my competitors."

"We will not accept any funny shenanigans because every time the results are delayed here, we also tallied and like in Gichugu the gap between myself and the second candidate were well over 15,000 but we are seeing them say the gap is reducing," Waiguru added.

She said that the officers at the tallying centre had asked for 30 minutes to conclude the process.

"They have now asked for thirty minutes and we are leaving them to conclude the process, we just hope that when we come back the process will have been fairly and conclusively ended," Waiguru said.

Earlier on Ndathi claimed that Waiguru's victory is a sham.

He told journalists on Tuesday that people voted until midnight.

Post a comment
WATCH: The latest videos from the Star
by RHODA ODHIAMBO @OdhiamboRhoda
News
25 April 2017 - 18:00
Read The E-Paper