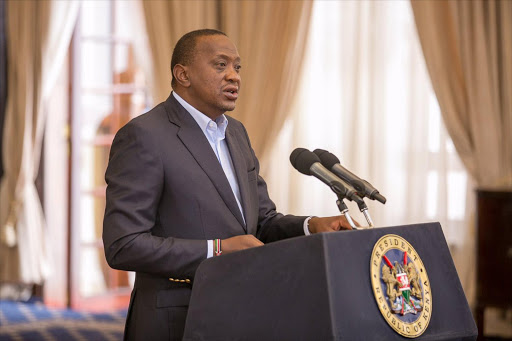 President Uhuru Kenyatta when he issued a statement on violence during party nominations on Thursday, April 20, 2017. /PSCU

President Uhuru Kenyatta has apologised for the chaos witnessed during Jubilee party primaries on Friday.

He said the party did not anticipate the large turnout of voters during the primaries which were cancelled following the confusion.

The President told journalists on Saturday that the party had estimated about 30% of turnout.

"Nobody expected the kind of turnout we saw yesterday and that is how the shortage came in."

"The party is still committed to free, fair and credible nominations. The new dates will be announced today," Uhuru said.

He said the process was cancelled across the country because the party wants the results to reflect the true will of the people.

Uhuru urged party members to stop pointing fingers at the officials over the mishaps that greeted the polls.

He said the party will ensure the shortage of ballot materials will be sorted when the polls are next held.

The nominations will be conducted in all the 45 counties where the party is fielding candidates.

"The NEC and party leadership have will issue a new timetable in accordance with the IEBC timeline."

"This time, we will be fully prepared," the President said.

"I have full confidence in the team standing behind me and their ability to deliver in these nominations."

"I am proud to be the leader of a party that can turnout the kind of numbers we saw yesterday," he added.

Tuju admitted the party had failed in some areas.

many aspirants were justified in being upset with "inconsistencies".

Tuju said lessons learnt will be used to plan primaries in counties yet to hold polls.

Uhuru and Deputy President William Ruto will use the party to seek reelection during the August polls.