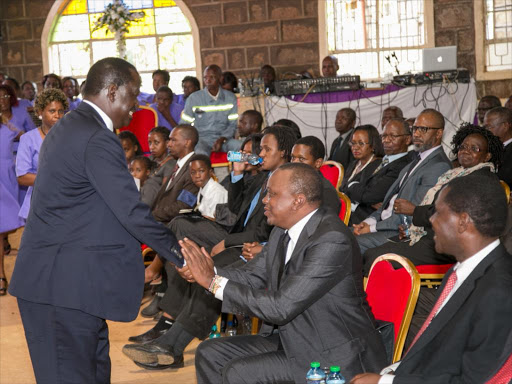 Mwiraria died on Thursday, April 13 at the Karen hospital after a long battle with cancer.

Talks about the infamous Anglo-leasing scandal dominated speeches during his funeral service at the Ntakira Methodist Church, Meru.

The president asked that Mwiraria be cleared of any wrong doing in the scandal as there was consensus that he was innocent.

“Let us all put pressure on the investigative agencies to fully investigate Anglo Leasing, arrest and charge the real culprits," he aid.

The head of state further urged

all those who had condemned Mwiraria, including Raila, to come out in the open and state clearly “it was all politics”.

"If people had not played politics, Mwiraria would not have been prosecuted and probably he would be alive today,” said the president.

Kenya lost Sh3.3 billion in the Anglo-leasing scandal in 2004 that involved the awarding of bogus tenders to ghost

companies for the supply of printing

Other fictitious companies involved in the scam were given money to supply naval ships and forensic laboratories.

None of the contracts were honoured.

Mwiraria, who was then Finance Minister, was accused of authorizing payments to the phantom companies.

Six other ex-government officials were also charged in connection with the scandal.

The case however collapsed in 2015 for lack of evidence.

On his part, Raila said it was a pity that Mwiraria died before being cleared of the “dragon of Anglo Leasing”.

“Investigations should be carried out and his name should be cleared posthumously of this demon,” Raila said.

Raila’s sentiments were echoed by Bungoma Senator Moses Wetangula who was also present.

the Kenyan law allows for people to be cleared of wrong doing posthumously if found innocent.

Kiraitu called for an amendment to the law to ensure that social media is not used as a tool of character assassination.

The Senator eulogised Mwiraria as a honest person who made significant contribution to the transformation of the country’s economy.

“We believe in the freedom of speech, but social media should not be used to abuse or taint the names of other people,” he said.

Munya said Mwiraria was a hard working public servant and called on the investigation agencies to do a thorough job and bring to book the real culprits behind the mega scandal.

"I have never met a politician as humble and honest as Mwiraria," Munya said.

President Kenyatta paid glowing tribute to Mwiraria, eulogising him as a great leader who was not biased or tribal.

“Mwiraria was a great son of the land whose service and contribution have made Kenya the great country it is today,” he said.

“We should begin to praise and say good things about people before they die. This way, they will feel appreciated,” added the president.

Odinga and Wetangula called for peace during the electioneering period, saying “we do not have a spare country”.

They said the August 8 elections should be about ideas and not physical confrontation.

Mwiraria was later laid to rest at his rural home in Meru.

Post a comment
WATCH: The latest videos from the Star
by EMMANUEL WANJALA, @RambsNabiswa
News
22 April 2017 - 15:00
Read The E-Paper