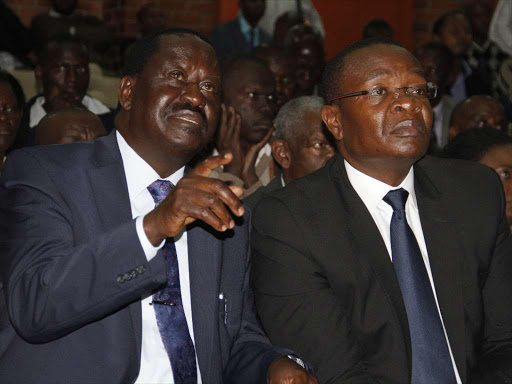 Funyula MP Paul Otuoma has ditched ODM, making good his threat of running for Busia governor as an independent candidate.

after Ojaamong was declared the winner of the primaries with 92,358 votes against Otuoma's 63,752.

Otuoma claimed the exercise was flawed and asked the party to cancel the results and schedule a repeat vote.

But he said his name will still be on the ballot paper with or without ODM in the August 8 polls.

"I will prepare to run as an independent candidate if that is the case. That is the only option available given the nominations deadline," he said on Wednesday.

"I will go to the electorate to ask for votes and let people decide who will be the Governor of Busia County. I have already made a decision to quit the Orange party after the Secretariat failed to solve them. I am suffering without bitterness," he told the press at Quills Hotel.

But he said he supports party leader Raila Odinga's presidential bid, adding he does not want to involve Raila in the current stalemate.

The MP also said he wants to avoid causing a rift among communities in Busia, as the Teso and Luhya have lived peacefully for many years.

"I will call a meeting of all elders to put the record straight and the need by all communities in the county to embrace peace and harmony," he said.

"I also don't want to divide ODM [as] that will jeopardise Raila from getting maximum votes in the county," he added.

Earlier, during a public address at Taxi Park, nominated MCA Nur Mohammed caused a stir by swearing Otuoma in as 'Governor of Busia County'.

Otuoma led by a wide margin at the start of the Busia nominations.

Provisional results indicated the legislator had been leading with 62,379 against Ojaamong's 39,874.

In July last year, Otuoma was among leaders from Western who quite ODM citing issues with the leadership.

He returned to the fold in September, saying he would not leave the party again.