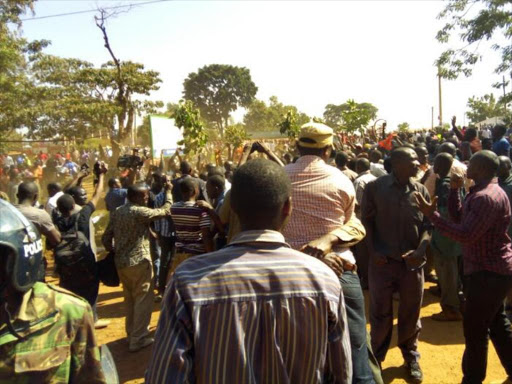 "No Otuoma. No Raila," Otuoma's supporters shouted as they marched towards the governor's office.

"No Otuoma. No peace in Busia county," the protesters said. They waved placards, screamed and shouted.

"This is serious rigging. Otuoma has won and that is it," one of the supporters said.

Otuoma told journalists that he is confident that he had won and termed the results as flawed.

"This is the will of the people of the Busia and it has to prevail. I am confident we have won elections and we are going to go ask IEBC to give us certificates," he said.

Otuoma, who did not look disturbed about the results, addressed his supporters explaining to them how the governor had rigged.

"Msiwe na hofu wenye watoto wanajulikana (Don't fear. The children's owner is known). Where do you get 90,000 in two constituencies?" he said, further asking Busia residents to reject 'thieves'.

Otuoma claimed that Ojaamong stole ballot boxes and stuffed them with votes.

"He has dialed the wrong number. Let us just be patient. I want to call the party leader, Junet Mohamed and Judy Pareno," Otuoma said.

Pareno is the ODM national elections board chairperson. She had told aspirants that the process will be free and fair.

Chaos erupted when the results were being tallied as Otuoma supporters demanded that he be declared the winner.

"The results that are being announced are provisional. Any losing candidate can appeal," Juma said.

Otuoma was fighting out with incumbent Sospeter Ojaamong for the ticket so as to take part in the August 8 general election.

Provisional results indicated that Otuoma was leading with 62,379 against Ojaamong's 39,874.

On Thursday, two ODM leaders in Busia and another in Bungoma county were injured.

This was following the chaos and confusion that rocked the primaries that kicked off on Wednesday.

ODM will on Saturday conduct primaries in Turkana, Kakamega, Samburu and Narok.