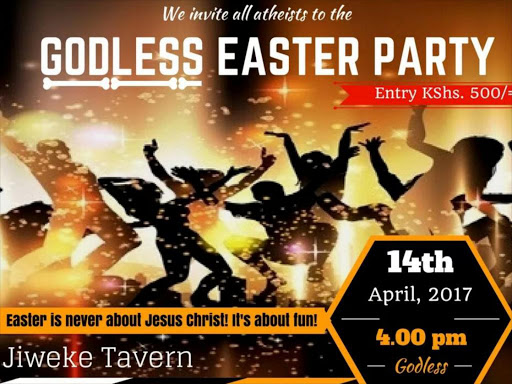 Jiweke Tavern has denied claims that it will host an event dubbed the 'Godless Easter Party' on Good Friday.

A poster circulated on social media indicated the party would begin at 4pm at the restaurant in Kibera road in Nairobi.

It was created by the Atheists in Kenya association headed by Harrison Mumia.

The poster stated the party was for all atheists and that the entry fee would be Sh500.

"Easter is never about Jesus Christ. It is about fun," the poster read in part.

the Star on Thursday that they respect the Easter weekend and will not host the party.

"We respect the reason for Easter; it is about Jesus. We are therefore not hosting the Godless party and have no association with the event or the individual [who shared the poster]," said Dorcas Njoro.

She apologised to all customers for the poster saying it was created and distributed by unathorised people.

But Mumia said they were

in talks with the restaurant on holding the party.

"They have called us...they are very furious that a non-Christian party at their restaurant," he told the Star by phone.

He said the action taken was discriminatory and unacceptable in any society.

"They are saying they are

Christians but we find this discriminatory. We

restaurant because it has a good reputation," said the AIK chairman.

Mumia added that the restaurant choice was made in good faith and ill thoughts should not surround their event.

to have fun. We want them to understand that atheists are also human beings," he said.

He added that 20 people had already confirmed attendance.