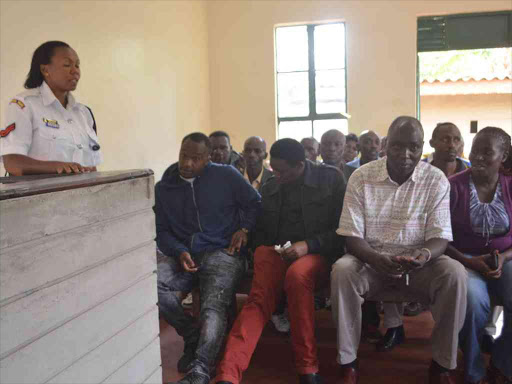 Musician and Starehe MP aspirant Charles Kanyi, popularly known as Jaguar at Baricho law courts where he was charged with causing an accident that killed two people, April 10, 2017. /GEOFFREY KIBISU

Jaguar, has been charged with dangerous driving and causing the death of a boda boda rider and his passenger.

Jaguar was charged at

Baricho law courts on Monday morning over the accident that took place on Makutano-Sagana road junction on March 21.

Witnesses said a woman was driving the car from Sagana to Makutano while the two men were headed in the opposite direction.

But Jaguar said he was the one driving.

Musician Jaguar's vehicle which was involved in an accident along Makutano-Sagana highway that left two people dead, March 21, 2017. /COURTESY

The court said today that he drove dangerously leading to the deaths of the two people.

He appeared composed even though he was not represented by a lawyer. He avoided journalists and drive towards Nairobi after leaving court.

Senior principal magistrate Evans Keaga said the case will be mentioned on May 5.