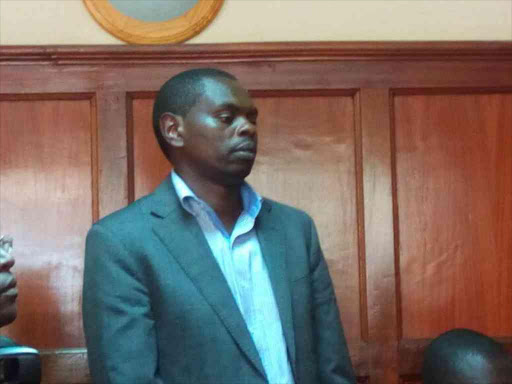 been charged with six counts of forgery and obtaining money by false pretenses.

He was accused of fraudulently obtaining a Suzuki Escudo worth Sh1.75 million from Thomas Getanguta.

The athlete allegedly pretended he was in a position to pay for it when he acquired it at Nakumatt Junction on Ngong' Road in Nairobi in 2013.

at an unknown place.

The court heard that he forged a motor vehicle sale agreement for a Suzuki Escudo and told one Nicholas Odhiambo that it was genuine.

He was also charged with

uttering a false document to Cecilia Muthoni at Central police station on the same date.

Komen was further charged with forging an acknowledgement letter for the receipt of Sh780,000 in

December 2014, claiming it was

a genuine acknowledgement of cash received from Odhiambo.

He faced a sixth count of issuing a bad cheque on

May 28, 2014; the court was told he wrote a Sh300,000 cheque from his CFC Stanbic account to Odhiambo, knowing it had insufficient funds.

The runner denied all the charges through his lawyer John Swaka and was freed on Sh500,000 bond or Sh300,000 cash bail.

Swaka had pleaded for reasonable bond terms saying his client was not a flight risk and would abide by all conditions set by the court.

Racecourse ward in Eldoret and may have been framed by his political rivals.

He asked for copies of witness statements for the case that will be mentioned on April 26 and heard on May 19.

7.58.61 world record in the 2-mile race set in 1997, he remains the only man in history to run back-to-back sub-four-minute miles, splitting circa 3:59.4 on both the first and second half of the race.