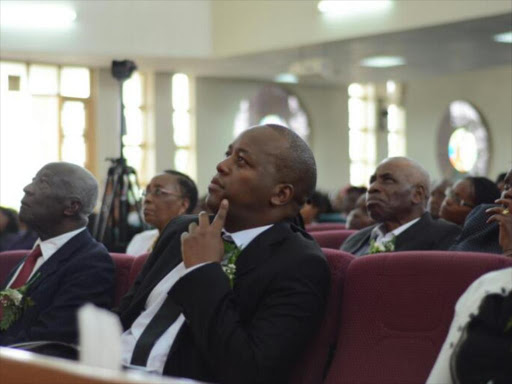 George Ikua during the funeral service of his wife Janet Kanini at the Nairobi Baptist Church, Friday, April 7, 2017. /EUGENE OKUMU

But many were not prepared for the emotional funeral service on Friday at Nairobi Baptist Church along Ngong' Road.

The ushers, most of them Janet's classmates from Precious Blood Riruta class of 1995), were easily identifiable.

They were dressed in black gowns with yellow corsages well placed on their upper left chest.

But the most heartbreaking moment was seeing Janet's daughter, Jaz, unaware of the deep loss she faced, staring at her mum's portrait on top of the coffin.

Her dad George all the while tried to forget his own sorrow and comfort her. He tossed her up and down but his effort seemed futile. It is tough losing a mother at such a young age.

A time came when emotions overwhelmed him and Jaz had to be taken out of the church. After the service she told her dad to stay with her much longer...to keep her mummy company with her younger brother Pedro.

In an emotional eulogy, Janet's husband narrated how he picked her from Kirichwa Road bus stop on their first date.

George appeared strong as he read the tribute but kept touching his head.

He appeared to struggle with his emotions as he turned away from the group of mourners with his head bowed most of the time.

Clearly heartbroken, he called Janet 'My Angel' as he attempted to cover his face while singing to her.

Overwhelmed with grief, he narrated how they walked up the road looking at a beautiful sunset and holding hands.

"How can anyone look so beautiful wrapped in a bomber jacket five times her size?" he said.

George remembered how nervous they were during that evening walk after realising something had just been born in their hearts.

The two met 14 years ago and indeed death, as they vowed before God at the altar, is what has separated them.

"I had not thought it possible that such eyes existed until I bumped into you while wandering at Phoenix Theatres having mistaken a closet for the bathroom," he said in his tribute.

"I know your mother is reading this. May God bless her for raising such a beautiful woman with the legs of a goddess."

All his faults, George said, meant nothing to Janet and just like everything else in life she saw only the good in him and their life together.

The sounds of 'Blessed be the name of the Lord' that played at the mass moved mourners to tears.

"You give and take away..." the voices went in low key.