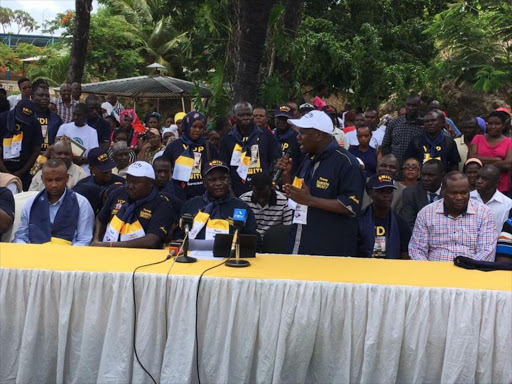 Awiti will use the party to vie for Mombasa governor, a post held by popular ODM candidate Hassan Joho, in the August 8 general election.

"While in Wiper, I announced my intention to vie for governor only for another person to follow my trail just to frustrate the move," Awiti said on Tuesday.

The legislator ditched Wiper citing frustration in an attempt by an unnamed person to deny him the party's ticket.

"Many talks were held with a view to finding a candidate. But it seems Wiper was not serious and was only keen on a cats and dogs game," he said.

Awiti said Kalonzo organised for 600 delegates to chose between him and Omar.

He said 100 delegates from each of the six Mombasa sub-counties were to take part in the primaries.

A date was set but the exercise was cancelled without his knowledge.

"Later, reports emerged that some people from the party had endorsed the other guy (Omar)," said the legislator.

Awiti further revealed that the Senator had agreed to retain his seat but reneged. Omar denied the claims in several tweets.

The MP added that he had no option but to leave as the mistrust had boiled over.

Before the 2013 poll, Awiti ditched ODM for Wiper through which he won the Nyali seat, flooring ODM favourite John Mcharo.

said VDP neither supports NASA nor Jubilee and will work with the business community to improve trade in Mombasa.

opposed to the establishment of a dry port that will "lead to job losses".

"We also want to know the mode of selection Kenya Ports Authority has been using to employ people," he said.

The party will, within 14 days, hold a national executive council meeting and ratify a proposal to make Awiti its leader.

Awiti said they will focus on investments in the tourism sector by ensuring enough resources are allocated.

"Besides all these, we shall partner with all stakeholders and the community and decide on [better service delivery]." he said.

"Key among them will be to in the county."

Post a comment
WATCH: The latest videos from the Star
by ERNEST CORNEL, @OduorErnest
News
04 April 2017 - 12:00
Read The E-Paper