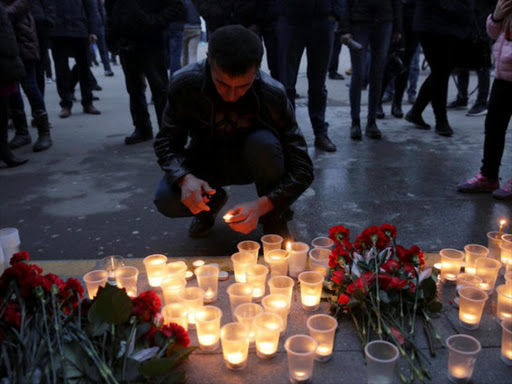 A man lights a candle during a memorial service for victims of a blast in St.Petersburg metro, outside Spasskaya metro station in St. Petersburg, Russia April 3, 2017. /REUTERS

Kenyans in Russia are safe after the Metro terror attack that claimed 14 lives, Moscow has said in a letter addressed to Foreign Affairs PS

An explosion in the

"We write to inform you that all Kenyans in the Russian Federation are safe. We have a good number of students in St Petersburg,"said Hillary Kyengo, Kenya's charge d'affaires in Russia.

In a letter dated April 4, Kyengo said the country will mark three days of national mourning following the terror attack.

"Saddened by the blast that killed 10 people.

We...pledge solidarity with the people and government of Russia," she said on Twitter Tuesday.

The blast in the train carriage was carried out by a

Kyrgyzstan, a former Soviet republic of six million, is a close political ally of Moscow and hosts a

The explosion was a suspected suicide bombing by a perpetrator with ties to extremists,

A spokesman for the Kyrgyz GKNB security service identified the suspect as Akbarzhon Jalilov, born in the city of Osh in 1995, but provided no other details.

There was no immediate claim of responsibility.

has been on high alert against attacks on its soil in reprisal for its military intervention in Syria, where Moscow's forces have been supporting troops loyal to Syrian President Bashar al-Assad. The Islamic State group has repeatedly threatened revenge attacks.

If it is confirmed that the bomber was linked to extremists, some sections of the

Russian society could see it as proof that Moscow's decision to intervene in Syria has made civilians into targets.

Russian President Vladimir Putin visited the site of the blast, which made a huge hole in the side of a carriage and blew of the door, with metal wreckage strewn across the platform.

Post a comment
WATCH: The latest videos from the Star
by NANCY AGUTU, @NancyAgutu and REUTERS
News
04 April 2017 - 12:00
Read The E-Paper