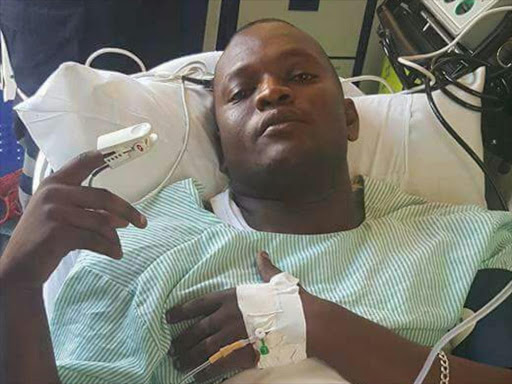 One of Kisauni MP Rashid Bedzimba's bodyguard Mwazwana Salim, injured during a shooting at an ODM rally in Migori town, April 3, 2017. /COURTESY

Mombasa Governor Hassan Joho's bodyguard was shot and injured by one attached to Migori's Okoth Obado during a chaotic ODM rally on Monday, an MP has said.

Obado made good his threat to prevent ODM from holding a rally in Migori town.

The rally at Posta grounds was completely disrupted when he arrived unannounced as Kisumu Senator Anyang’ Nyong’o addressed the crowd.

Immediately after seeing him, the crowd booed and threw water bottles, stones and shoes at the podium.

This forced Obado's guards to fire in the air. A bullet went through a VIP seat in an area where dignitaries were seated.

The seat had blood stains but it was not clear which official was shot.

Mvita MP Abdulswamad Nassir told the Star: "This was an assassination attempt. They were after Joho. Our car was shot at three times."

Joho's rallies have either been cancelled or ended in chaos. Police have given reasons including lack of approval and their inability to provide security.

The Governor was in the county to officially launch ODM office with fellow ODM deputy leader Wycliffe Oparanya (Kakamega).

A group earlier demonstrated against Obado after ODM organisers were locked out of Migori county stadium.

Trouble began on Sunday night when an

The confrontation involved a group allied to allied to Obado. The other was of supporters of Suna East MP Junet Mohamed and former Rongo MP Ochillo Ayacko, who is a governor aspirant.

The area around the stadium was a no-go zone as supporters hurled stones at each other. Police were overwhelmed by their number.

The crowd opposed to Obado went to Posta grounds some 200 metres away.

grounds at about 1pm but was blocked by youths who asked him to return to his office next to the stadium.

his supporters outside the new office:

“Let them know I will not tolerate this level of provocation and incitement. We will sit here (in the new office) and prevent it from opening. If they move to a new venue others will follow them there."

"This office is not going to be opened. We don’t want violence brewed outside Migori here.”

Obado said Joho and his entourage, which also included Siaya Senator James Orengo did not inform him of the function.

He accused the team of coming to Migori to try and endorse Junet and Ayacko ahead of the April 19 primaries.

“Joho is a deputy party leader, he should be highly neutral. The problem is that my colleague is coming to my terroritory and I have been kept out of the programme,” he said.

Post a comment
WATCH: The latest videos from the Star
by By Manuel Odeny, @ManuelOdeny
News
03 April 2017 - 15:00
Read The E-Paper