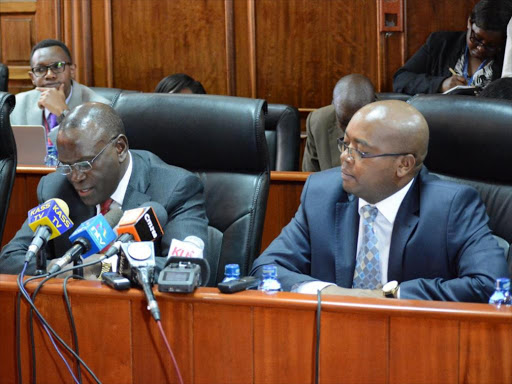 A file photo of Health CS Cleopas Mailu and PS Nicholas Muraguri during an appearance before the Senate. /COURTESY

Health PS Nicholas Muraguri has been moved to the Lands docket in President Uhuru Kenyatta's reassignment of office holders.

of undermining his authority during negotiations to end the doctors' strike.

Muraguri will be replaced by Julius Koris who was Principal Secretary for Industry and Enterprise Development.

"Uhuru has deemed it necessary to make changes to the organization of government. The President has purposed the changes to enhance teamwork," said State House spokesman Manoah Esipisu.

In a statement to newsrooms, Esipisu said the reassignment

will also improve accountability for results in the government's execution of its responsibilities.

Peter Kaberia from Defence to Sports and Development.

Saitoti Torome who was in Planning has been moved to Defence, Wilson Nyakera from Transport to Planning and Paul Mwangi from Public Workrs to Transport.

Richard Ekai was transferred from Sports and Development to Correctional Services.