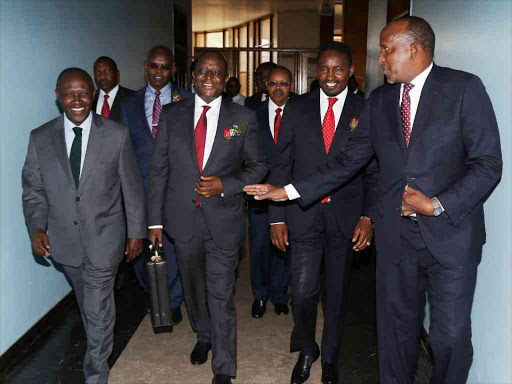 The government has raised betting taxes to 50 per cent in all categories, dealing the industry a major blow.

While reading the 2017/18 budget at Parliament on Thursday, Treasury CS Henry Rotich noted that betting and gaming have become widespread.

But the environment is inadequately regulated, the CS said.

"The expansion of the industry has had negative social effects on society, especially on the youths and vulnerable members of the society," Rotich said.

proposed the taxes be raised from

proceeds will be put in the sports fund to help support the development of sports, culture and arts.

The bill sponsored by Gem MP Jakoyo Midiwo proposes an enhanced taxation regime to ensure the taxman collects more from the lucrative industry.

KRA commissioner general John Njiraini told the National Assembly on February 21 that the agency collected about Sh4.7 billion in corporate tax from betting firms in the last three financial years.

Kenyans on Twitter asked Midiwo to stop "playing hide and seek" with the gambling bill he tabled in Parliament.

Midiwo is pushing for the adoption of an amendment bill that provides a proper legal framework for regulating and controlling gambling.

“We have proposed in this law that no foreigner can own a gambling licence in Kenya. Many of them, including Chinese and Bulgarians, are not licensed," he said.

But Kenyans have protested through hash tag

Giddy Loftus said: "Did Midiwo really do good research before tabling the bill? All this hullabaloo about betting...let people do what they wish. People are so concerned about how others live their lives."

Midiwo warned that gambling will break Kenya's economy and likened controlling the "disease" in Kenya to dealing with the activities of the mafia.