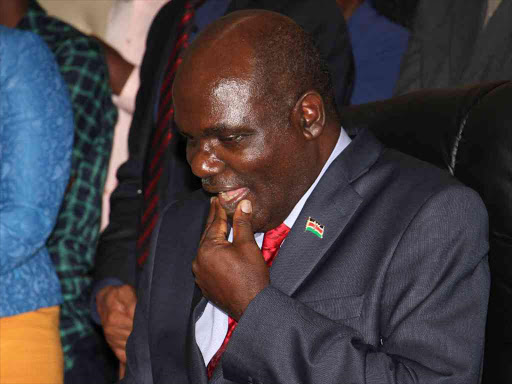 Mudavadi claimed in a statement on Thursday that the decision to cancel the tender pointed to an attempt to cover-up corruption.

"We want the probe to look into the role of the Public Procurement Oversight Authority in awarding the tender before it was evaluated by IEBC," he said.

The system is expected to be used during the August 8 general election to integrate the existing biometric voter registration, voter identification and the electronic transmission of

Political party and candidate registration systems were also to be clipped to the system.

raised fears that the technology might not be in place on time.

In a letter to the firm on Tuesday, IEBC CEO Ezra Chiloba also noted that the bid was "significantly above the budgetary provision".

The CEO also said litigation was a reason for the cancellation.

But Mudavadi dismissed his explanation saying:

"We cannot buy that idea since public information points at corruption."

He questioned the electoral body's acceptance of liabilities saying there may have been an underhand understanding with Gemalto SA for compensation.

"Will such compensation be legal and justifiable in the context of the controversy surrounding the award?" he asked.

The Amani leader said the commission should come clean on what happens next.

"It will be almost impossible for the commission to execute its mandate within the statutory timelines," Mudavadi said.

"This is not only a curious line of argument but introduces a terrifying thought that KIEMS might not be put in place."

a mandatory legal requirement for elections.

"Cancellation of the fabricated tender award shouldn't be an excuse for IEBC to circumvent the law in having the system in place for a credible election," he added.

According to the Elections Act, procurement of electoral technology should be done eight months before the elections.

The law also requires the IEBC to test, verify and deploy such technology at least 60 days before a general election.

Last week, the Star revealed that two top Jubilee officials have been accused of influencing the award of the tender to a firm whose capacity is questionable.

It also emerged that Gemalto SA to deliver the complex integrated technology required for the polls.

The firm reportedly has no history of dealing with elections and, in fact, specialises in chip technology for mobile telephony and banking.