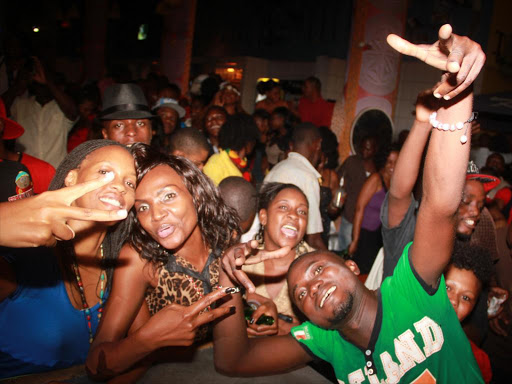 A file photo of Kenyans ushering in the New Year at Club Lambada in Mtwapa, /ELKANA JACOB

Kenyans are the 13th happiest people in Africa according to a UN report.

In the latest UN World Happiness Report released Monday, Algeria is in the lead, followed by Mauritius, while Libya comes in third place.

Despite instability due to al Shabaab threat among oters, Somalia comes fifth, while Nigeria and South Africa follow.

The report takes into account the GDP per capita, life expectancy, social support and freedom to make life choices as indicators of happiness.

as the happiest country in the world, followed by Denmark and Iceland.

Kenya was ranked position 122 globally in the 2016 report. We have now moved 10 places up and are currently position

Others are Tanzania, Burundi and the worst of them, Central African Republic.

Among factors making Africans unhappy are lack of jobs, minimal access to health care, and high levels of corruption, the report notes.

But the report also shows Africa’s youths are very optimistic for a bright future.

The continent’s rich mineral wealth, which has not been exhausted. and vast agricultural land provide unlimited opportunities according to youths.

"In the new millennium, foreign direct investment in Africa eclipsed development aid for the first time since the colonial.

"African people are essentially optimistic, most of all the youth who have their lives ahead of them. This optimism might serve as a self-fulfilling prophecy for the continent,” the report shows.

The report uses data from the Gallup World Poll.