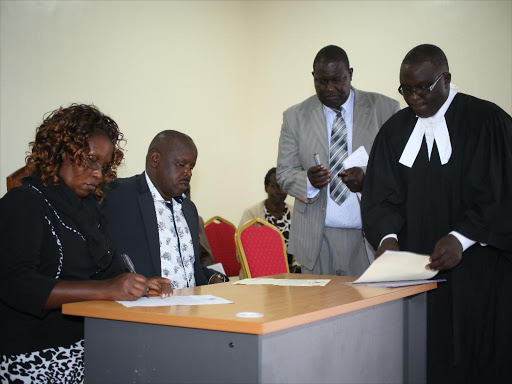 Bomet Governor Isaac Rutto on Monday made good his threat and ‘replaced’ Deputy Governor Stephen Mutai, in what is likely to trigger a constitutional crisis in the county.

Unveiling former acting county secretary Geoffrey Langat the as the ‘new deputy governor’, Rutto said he made the decision to ensure service delivery was not affected due to Mutai’s absence from office.

Rutto said Mutai has absconded from duty for the last one-and-half years, opting to engage in his ‘own businesses’, hence the need to replace him. Speaking during the ‘swearing in’ ceremony of new Education and Social Services executive Sally Towett at the new county headquarters, Rutto ordered Mutai to surrender all the property belonging to the county in his possession, saying it was pointless for him to continue holding onto it, yet he is no longer in office.

"Mutai has been out of office but still earns a salary and uses property belonging to the government. I understand he is busy campaigning for some party that I do not know. And for that matter, I want to release him so that he can fully concentrate on it" the governor said.

"This is a political seat and I expect him to handover everything that comes with it to the incoming deputy, who will assist me in my political campaigns."

Mutai has announced his interest to unseat Rutto on the Jubilee Party ticket. The incumbent in vying on his Chama Cha Mashinani ticket, and has already launched his campaigns.

Mutai crossed paths with his boss two years ago, soon after he refused to join Rutto’s CCM.

In a quick rejoinder, however, Mutai said he will not surrender the property in his possession, insisting he is still the Bomet deputy governor, "until the end of my term."

"Those are public relations gimmicks by the governor…If indeed he has replaced me with someone else as he claims, let him give me the letter to that effect," Mutai said.