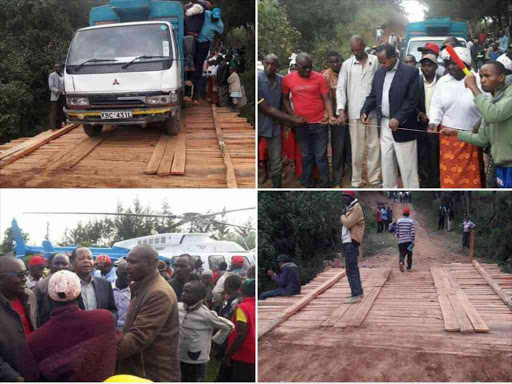 Nyeri Senator aspirant Ephraim Maina has been criticised for his Saturday's trip to Kieni to launch a wooden bridge on a helicopter.

But Kenyans on social media have questioned the logic of the billionaire politician's use of a helicopter for such a small event.

"Engineer wasted his chopper fuel to launch a wooden bridge? It's the 21st Century," Eustus Gitonga, a facebook user, said.

Blogger Robert Alai asked why Maina had to burn so much money to launch a wooden bridge.

Samson Maina said: "A whole engineer flying to a village to launch a wooden bridge and cutting a string – God deliver us."

But Priscilla Faru said: "Since he used his own money and not the county government's or the CDF, there is nothing wrong with his actions."

"Those criticising [him] should show us what they have built for the community with the little money they have," she said.

A user identified as Maina wa Karatina urged those faulting Maina to work hard and buy their own choppers.

The aspirant said he generously funded the bridge to ease movement of people between Kinyua wa Mweru and Gachini.

"They have been using long routes to access the other side of the road. The bridge has saved pupils," the politician said.

"Agricultural products will no longer rot in the farm because buyers can not access the road," he said.

Gituanja said those criticising the project are not locals, hence do not understand its importance.