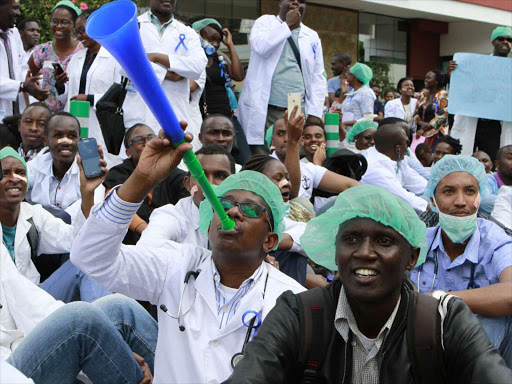 Doctors signed an agreement and called off their strike on Tuesday when it hit the 100-day mark.

"By doing so, we bring to an end the painful struggle that we have been through," Oluga said during a press briefing.

"Patients and doctors cannot be separated. The strike is over but we need to restore industrial harmony."

The health workers agreed to return to work and will now get new allowances backdated to January 1, 2017.

The agreement states that the allowances will be paid to all practicing doctors, pharmacists and dentists.

Those in Job Group M, N and P will receive an additional allowance of Sh 42,000 per month, and will therefore receive Sh72,000.

Job Group Q and above will receive an additional allowance of Sh50,000 per month with a sum payable of Sh80,000.

"Every doctor gets a new medical risk allowance of Sh20,000 per month effective January 1, 2017," the agreement states.

Following the agreement, all doctors shall be placed in their appropriate job groups whereas pending promotions will be effected within 6-12 months.

"This will be in accordance with the revised scheme of service...all parties to withdraw court cases on the same, as well meet costs of the suits," the agreement states.

The parties also agreed that there will be no victimisation of all the doctors who participated in the strike that began on December 5, 2016.

"All employers should forthwith and unconditionally and withdraw all show cause letters, dismissal letters and any other written or verbal punishment or threats of punishment emanating from the industrial action," the agreement states.

"This includes but not limited to arbitrary transfer and discriminatory assignments of duties by the employer to the leaders of KMPDU," the parties agreed.

In the deal, the current emergency call allowance shall be renamed doctors allowance.

The signing of the deal now ends the push and shove that characterised the strike, leading to the incarceration of the union officials.

from
Post a comment
WATCH: The latest videos from the Star
by PATRICK VIDIJA, @vidijapatrick
News
14 March 2017 - 18:00
Read The E-Paper