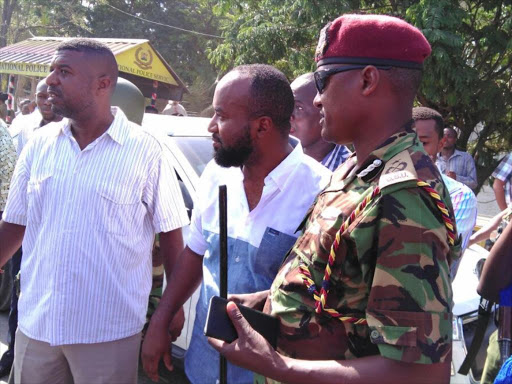 Mombasa Governor Hassan Joho has reportedly been barred from attending an event where President Uhuru Kenyatta is set to launch the Mtongwe ferry services on Monday.

Joho was surrounded by heavily armed police officers in Nyali bridge amid allegations that Uhuru ordered his arrest.

But Joho's political advisor Idris Abdulrahman said police told them that they had instructions to prevent the governor from attending the event.

He said earlier on a contingent of police, GSU and Flying Squad detectives raided Joho's house in Nyali before they set up police check in every outlet of Nyali.

Joho is expected to address the press shortly.

On Sunday while addressing a rally at Tononioka grounds, Uhuru had accused Joho of riding on projects initiated by his administration.

Uhuru said his government had disbursed over Sh40 billion to the county, yet it was among the worst developed counties in the region.

Uhuru challenged Joho to enumerate his achievement in Mombasa before resorting to insulting him and his government’s projects.

"Instead of wasting your time criticising what my government has done, stand up and tell us what you have done with the Sh40 billion we have given you to improve the lives of Coast people," Uhuru said.

He said Joho imposes himself in photos with the President to lie to people that he was part of what was being launched.