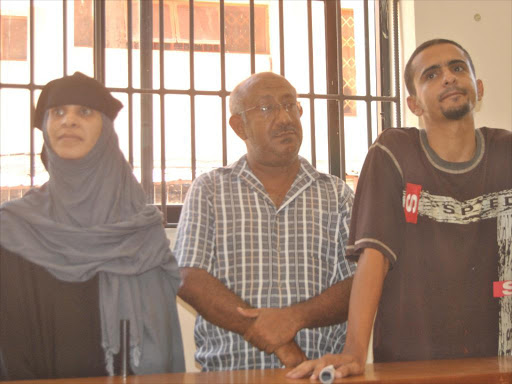 The three were among six people arrested by anti-terrorism police officers on Friday at Shella area, Malindi.

They will be held at Malindi police station for the said period.

Malindi police boss Matawa Muchangi said the other three suspects were released as they were university students.

In a sworn affidavit, Bakari said the DCI was making inquiries into whether the three solicited funds for,

or supported, a terrorist group.

"We have information that the suspects are financing al Shabaab and were planning an attack in Malindi," he said.

The investigation touches on possible links with plans to hit Ethiopia, Somalia as well as Mombasa, Malindi and Lamu," Bakari said.

The officer said the group's transactions through Dahabshil should also to be probed.

"I need more time to take their mobile phones and laptops to Nairobi for analysis," he said, adding that 24 hours were not enough.

"I am apprehensive that the respondents may go out of the jurisdiction of this court before the investigations are complete."

Lawyer Patrick Shujaa, appearing for the accused, said the 30 day-period was too long.

"If the investigation team has acquired phones and laptops, they don't need 30 days to get the data," the lawyer said.

Prosecutor Alice Mathangari told the court the nature of the offence and the sensitivity of terrorism warranted the sought time.

"Since the offence is grave, it is only fair if the investigation officer is given a chance to explore the case," Mathangari said.

The case will be mentioned on March 27.