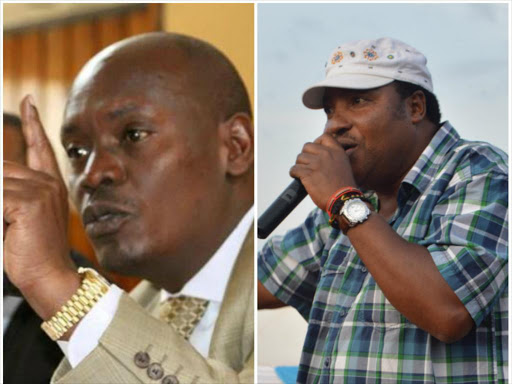 William Kabogo has lost a bid to stop Kabete

MP Ferdinand Waititu from issuing statements linking him to violent crime and drug-dealing.

A court ruled on Thursday

that the Kiambu Governor did not present sufficient grounds to justify the issuance of an injunction.

“Kabogo has not made a case for granting the orders sought in the notice of motion dated April 12, 2016. Consequently, I dismiss it with costs to Waititu,” justice Beatrice Thuranira said.

The court further ruled that the matter should proceed to full hearing.

He claimed the MP

Waititu allegedly posted that Kabogo and 14 others were banned from

the US in November 2014 for allegedly engaging in shady business deals. It was also reported that he

a "small criminal" who sells drugs.

The Governor wanted Waititu held liable for diminishing his reputation and defaming him in the eyes of his peers.

He argued through his lawyer that the words were not only malicious but also defamatory and that they were well calculated to malign his reputation.

to dismiss the case saying it was frivolous and lacked merit.

He said the late

Internal Security minister George Saitoti named the Governor as one of

Kenya’s drug kingpins based on a report published by the US government in 2010.

“There is no jurisdiction conferred upon this court to entertain the suit and the pleas are time barred having arisen in the year 2010,” the MP said.

Through his lawyer Harrison Kinyanjui, he said Kabogo should have sued the American government which first connected him “with issues which he claims he was later cleared of”.

The Governor, who had personally testified before justice Thuranira, explained that he had never been investigated, charged or convicted of any offences.

"As a politician and businessman in clearing and forwarding contracts, cargo transport and real estate, my dealings are legitimate and above-board," Kabogo

The two will vie for the Kimbu county chief seat in

Post a comment
WATCH: The latest videos from the Star
by STAR REPORTER, @TheStarKenya
News
09 March 2017 - 12:00
Read The E-Paper