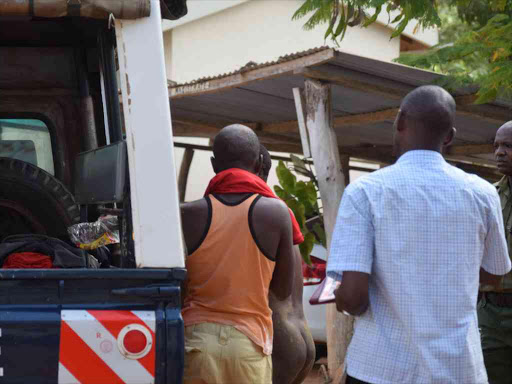 A Kwale court was treated to drama on Monday when a suspected car thief showed up naked and refused to wear his clothes.

Harman Mkalla, who arrived with his clothes in his hands, had also smeared his body with stool.

He arrived with accomplice

Fredrick Omondi in a Kinango police station van. The two were escorted by inspector Stephene Muli.

Mkalla brought activities at the court to a halt as all those present wanted to take a look at him.

But as he walked by, the people held their noses to block his bad smell.

Resident magistrate Paul Mutai asked officers to convince the suspect to get dressed before he could be taken to the chambers.

“We cannot allow him [to go there] naked. At least wrap him in sheets because his is not decent," he said.

The suspect agreed to Muli's pleas for him to wear his clothes.

Asked why he had insisted on staying naked, Mkalla said his money and phones were confiscated and that he was denied the right to contact his relatives.

for 14 days for investigations to be completed.

He noted the case was of robbery violence.

Muli said the suspects were found with a stolen Mitsubishi FH lorry, registration KCE 175G, when they were arrested on Sunday.

They were apprehended in Taveta, Taita Taveta county,

after officers were tipped off by members of the public.

The magistrate said the suspects would be held for the two weeks.

“While in custody you will be allowed to get in touch with relatives or a counsel of your choice,” said Mutai.

He set hearing for March 20.