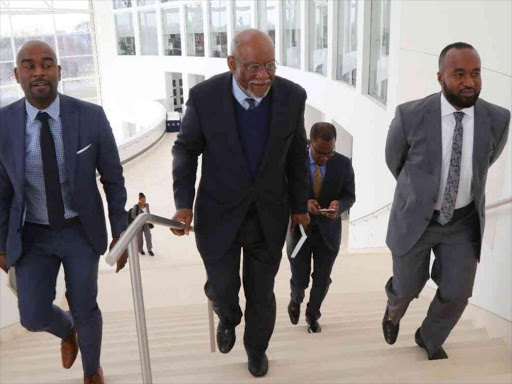 Mombasa Governor Hassan Joho (right) with former US Ambassador Johnnie Carson (center), who is now a Senior Advisor at the United States Institute of Peace (USIP) during a round-table meeting in US. /GPS

Mombasa Governor Hassan Joho is expected to jet back into the country on Sunday after his two week visit in the United States.

From there he is

to leave for Mikindani, Tudor, Bamburi Mwisho and Frere Town where he will hold a rally.

trip was seen as a major boost in efforts to clear his name against allegations of drug dealings.

In what is seen as a public relations stunt aimed at vindicating Joho over drug dealings, he has been active on social media, highlighting the official meetings he has been attending.

During his tour, he met former US ambassador to Kenya, Johnnie Carson, who is now a senior advisor at the United States Institute of Peace, and also had a round-table meeting with senior program officers working closely with Mombasa and other key cities.

He also met with members of the Kisii and Somali communities in Minnesota, and engaged Kenyans on issues related to their lives in the US and their take on current affairs in Kenya.

In what has been termed as the “Mombasa story”, Joho is pushing on the need for cities and nations to rethink the global war on violence extremism and terrorism.

Joho's trip has sent a strong statement back in Kenya, and in the Coast region, even as he tries to curb a different image from that of politics.