Do not vote for Opposition, Murungi pleads with Ameru after Nasa tour 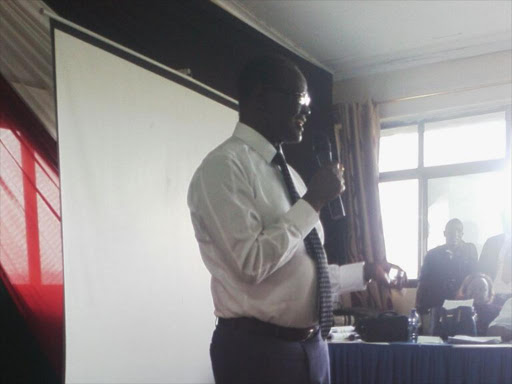 the community not to make "the mistake" of voting for the Opposition.

Kiraitu said on Thursday that his plea was informed by his 10-year experience on this side of the political divide, which is led by Cord and ODM boss Raila Odinga.

"I know how it feels to be in the Opposition," he said

He added in his address at the heads of schools annual meeting that President Uhuru Kenyatta cannot be voted out.

Murungi further said that he would rather be a sweeper than have a big title in the Opposition.

the teachers to be Uhuru's ambassadors, saying the county's big projects resulted from their support for the

The Senator said elders from the region have complained about neglect by the government but that the President was still mindful of the community.

He also asked the teachers to vote for him so he can take over from Governor Peter Munya.

Raila endorsed Munya during Nasa's tour of the county.

He asked residents to support Munya because he "truly believes in devolution",

expressed sympathy for the Governor and accused Jubilee of frustrating his efforts to push for devolution.

"Munya is a friend ... we have a lot in common as far as devolution is concerned and he has been frustrated in his efforts. In this regard, we will work closely with Munya if we get to head the national government," the Cord chief said on Monday.

Regarding strongholds, the Opposition chief said they no longer exist as Kenyans are more informed.

Raila said the Opposition will raid more Jubilee zones to win votes as tribes will not determine the outcome of the August 8 election.

The National Super Alliance held its first rally in Eldoret where DP William Ruto enjoys support. They then pitched camp for two days in Meru and Tharaka Nithi counties, the doorsteps of President Uhuru Kenyatta.