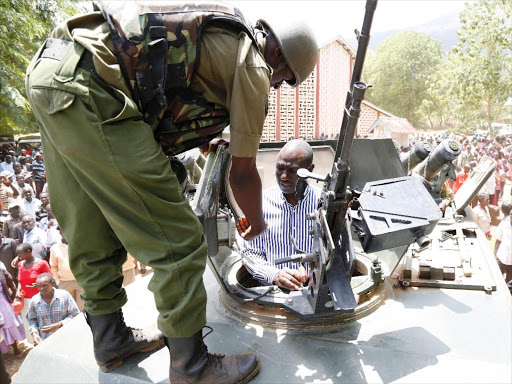 Deputy President William Ruto said the order would be gazetted overnight and officers will begin the operation today.

He was in the region on Friday. Ruto announced the deployment of 381 security officers, among them 230 Administration Police officers and 151 Kenya Police Reservists.

A team from the Rapid Deployment Unit will back the officers. Ruto said the shoot-to-kill order is the only way to deal with criminals shedding innocent blood. “This aims to clear armed bandits for displaced people to return to their homes,” he said.

Ruto ordered Pokot herders grazing their animals in Baringo North, Baringo South and Kerio Valley to go back to Tiaty.

animals have been stolen.

The DP said he will visit the region every two weeks until cattle rustling and bandit attacks become a thing of the past.

“I don’t want any jokes. I would like to see every child, woman and man sleep in their houses in peace,” he said.

Ruto sent condolences to bereaved families, saying the government will compensate them. He urged opposition leaders to stop criticising insecurity and instead join hands to end the vice.

At least 10 people have been killed, two injured and more than 5,000 residents displaced. Ruto ordered security agencies to apprehend the armed bandits, whom he said are well-known by residents.

Post a comment
WATCH: The latest videos from the Star
by STEPHEN RUTTO
News
28 February 2017 - 01:00
Read The E-Paper