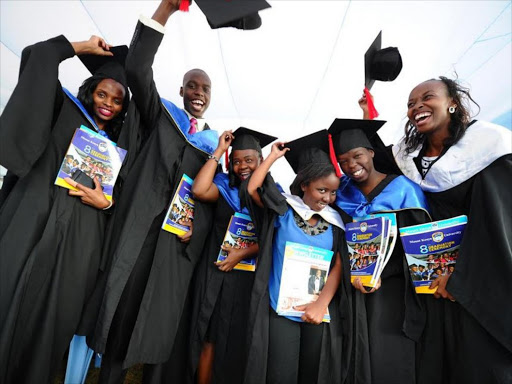 Power to read: Graduands from Mount Kenya University celebrate during the eighth graduation ceremony at the Thika Campus

The year 2016 will go down in record as the first time that the government of Kenya took a bold attempt to enable more students attain university education.

It is in the implementation of this program that a group of 1,126 students joined Mount Kenya University in the month of September.

They are part of the 10,000 students that the government placed in private universities in the country for the first time since independence.

One of them, Victor Mung’oni Kusimba, 20, is living his dream at MKU, taking a course in dental technology. Ever since he visited a dentist while in lower primary school for a tooth extraction, his passion has been locked on dentistry. But after completing Form Four last year, this dream appeared to fade out of sight.

His grade of B+ at 70 points in the 2014 Kenya Certificate of Secondary Education (KCSE) examination denied him admission into a public university to pursue the career he loved.

What followed was a protracted battle with his family, who wanted him to join the Kenya Medical Training College to study in a diploma program. He did not budge. When the government declared it would sponsor 10,000 students to private universities, he grabbed the chance and applied to Mount Kenya University, which offers a degree in Dental Technology. He was accepted to join.

Linet Wairimu Mwangi, 19, was destined to join Mount Kenya University. Even before the Government decided to sponsor 10,000 students to private universities, she had applied to join MKU for a course in economics and finance. However, when the government offer arrived, she switched to Bachelor of Education in special Needs and was offered a place. “I love children and I love teaching,” she explains.

Lynna Norah Mulama knows that poverty can deter people from pursuing their dreams. She says had the Government not decided to sponsor her, she would not be at MKU or any other institution of higher learning. “My parents are poor farmers,” she says. “They could not raise money to take me through a parallel degree programme or even a diploma course. I probably would still be teaching at the local primary school just like I did after completing Form Four.”

When she was not selected to a public university, she knew she was set for a long stay at home. Then came the chance to still be sponsored by the Government to a private university, and MKU it was for her: “I thank God for bringing me to MKU. I am delighted to be here and will work towards attaining my goal. My parents thank God for this opportunity. My mother escorted me to the university and urged me to work hard. I will. As the first born, I can open the way for my siblings.” Lynna, 19, is studying for a Bachelor of Arts degree in Economics and Statistics.

Rita Nafula Kibiti narrates a similar tale, saying lack of fees would have seen her fail to join a higher education institution after she completed her Form Four last year. “I sat my Kenya Certificate of Secondary Education examination last year with my elder sister,” she explains. “My parents could not take us both to college. My sister joined KMTC, where she is pursuing a diploma in clinical medicine. They had to fundraise to pay her fees. I was to stay at home at least until 2017, so that they try to raise money to take me to college.” Rita says she is grateful to Government for sponsoring her to MKU, where is studying for a degree in Economics and Finance.

Geoffrey Gitui Njoroge is another happy student at MKU because, as he says, he is pursuing his “dream career”: an undergraduate course in dental technology at MKU. He is grateful for the opportunity because he is sure had he not been sponsored by Government here, he probably would have joined a middle-level college instead, owing to lack of fees to privately join university. “Since I was young, my passion was in the medical profession. I really appreciate the Government sponsoring me with Ksh70,000 every semester. My family would not have raised this kind of money on top of the Sh11,500 they contribute,” he says.

Edwin Oloo Odhiambo, 20, from a single parent family, thought he was dreaming when he was admitted to pursue a Bachelor of Science degree in Hospitality Management at MKU.

“I am thrilled to have joined MKU, more so that the government enabled us to undertake degree studies. This would not have been possible had the government not intervened. My experience in MKU so far has been great. I believe that when I graduate, I will be MKU’s best product from my course,” he said.

Busienei Kipchumba Weldon, also 20, had applied to different universities, and was glad to be selected by MKU to pursue a degree in Economics and Statistics. To him, missing the chance to join a public university by a single point was painful, but the pain dissipated when he was offered a place at MKU. The determined young man who was taken through secondary school by well-wishers says he is prepared to do his best so that he can lift his family out of poverty.

“I am the eldest child in the family and my sister who follows me dropped out of school in form one for lack of fees. I want to change all that by ensuring I perform well and graduate.”

On his part, Johnson Kabera says he applied for the Animal Health and Production degree course at MKU because he wants the knowledge to help him reap rewards from farming.

Philip Mutunga Titus, who is pursuing a degree in Business Management is yet another beneficiary of Government sponsorship to a private university. Before the government’s offer, he had applied to study Diploma in Banking and Finance course at MKU, and hoped his peasant parents would somehow raise the Sh25,000 fees per semester. He is happy the government is sponsoring his undergraduate studies to the tune of Sh70,000 for a year.

Mount Kenya University is a private, multi-campus, chartered university in Kenya inclined towards Science and Technology. MKU is one of the largest private universities in the country, with a student body in excess of 52,000, as at September 2015.

Post a comment
WATCH: The latest videos from the Star
by Powered By Mount Kenya University
News
22 February 2017 - 15:00
Read The E-Paper