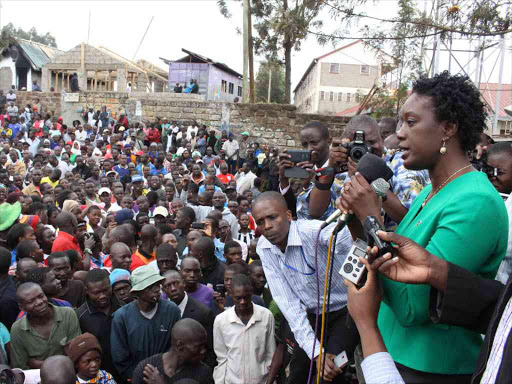 MP aspirant Rosemary Odinga has a brain tumor but it

non-cancerous, a source within the hospital has told the Star.

was admitted at Agha Khan University Hospital on Friday with a

and moved to Nairobi Hospital on Sunday.

The source said she had been in the hospital's Intensive Care Unit before she was moved back to Aga Khan on Monday morning.

A doctor at The Aga Khan, who spoke to the Star in confidence, said Rosemary has meningioma, a brain tumor that is not life-threatening but

applies pressure to the brain.

A meningioma is not harmless as it can cause blindness, problems with movement and multiple other complications as it grows and presses into the brain

It is not immediately life-threatening but remains a serious threat to Rosemary's health, as it in the meninges - the lining between the brain and the skull.

Rosemary is being examined by two surgeons who will decide if she should undergo surgery. The removal of the tumor involves lengthy neurosurgery and is followed by radiotherapy.

Other sources close to Rosemary said her hospital records were untraceable and that only family members were allowed to visit.

Rosemary, 39, is functionally the first born following the

by Winnie Odinga and Raila Odinga Jnr who is the last born.

Her father was the Lang’ata MP before the constituency was split into Kibra and Lang’ata.

Rosemary is known for being the only snail farmer in East Africa.

Since June 2015, as the patron of Key Empowerment Foundation Kenya, she has been at the forefront of facilitating youth and women to apply for and get birth certificates and ID cards to enable them fully access government services.