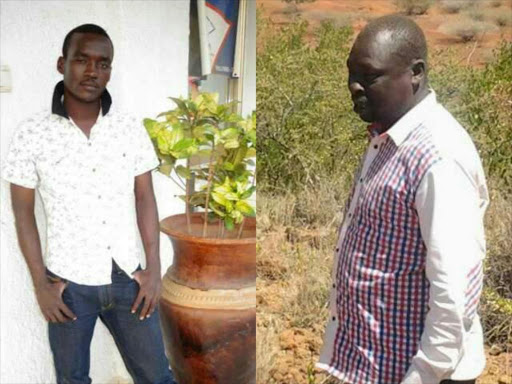 A Baringo MCA and a Jubilee MP hopeful were shot dead on Saturday at a bar in Marigat town under unclear circumstances.

Baringo police boss Peter Ndung'u said the killers, who are yet to be positively identified, were armed with an AK47 gun and a machete.

"Reports indicate that they were hooded. They entered the bar from the main road and went straight to the two politicians," Ndung'u said.

He said they are investigating the motive of the killing, appealing to residents to remain calm as tension built at the town.

Ndungu called upon members of the public with information that could lead to arrest of the two to share the same with police.

"Police officers have been deployed to the area and patrols have also been intensified," Ndung'u, the county police commander, said.

The two politicians were with friends at Petro-Alfa junction resort, which has since been closed following the 12.30am incident.

The restaurant where the MCA and MP hopeful were killed in Marigat town, Saturday, February 18, 2017. /JOSEPH KANGOGO

"We have arrested the bar attendants and the watchmen who are assisting us with investigations," the police boss said.

The death of the leaders comes a day after Baringo leaders were summoned by Interior CS Joseph Nkaissery over insecurity in the area.

On Wednesday, a teacher was killed after suspected bandits sprayed bullets at Kapindasum primary school in Baringo South.

Kitambaa shot in the limelight during the contested election of Jubilee officials when he rejected a list forwarded by Kamama.

Together with Chereti, they forwarded their preferred list of officials to the Independent Electoral and Boundaries Commission.

He is a renowned resourceful person in Tiaty sub-county and has been championing for development in the region.

Kitambaa spearheaded a deal for Diatomite exploration which the county government recently signed with an Indian investor.

Cheretei was known for his eloquence, fearless and bold speeches in the County Assembly above his impeccable loyalty to Jubilee.

Residents have urged police to probe any political links to the duo's bloody murder, citing growing rivalry ahead of the August 8 poll.

The MCA's vehicle torched while that of Kitambaa was partly damaged.

A police officer near the MCA's car that was torched after the legislator was killed in Marigat town, Saturday, February 18, 2017. /JOSEPH KANGOGO