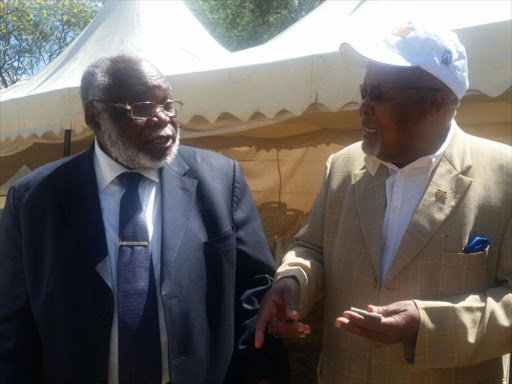 Migori Senator WIlfred Machage has decamped from ODM to Democratic Party as he prepared to vie for Kuria West MP.

Machage, who was received by DP leader Joseph Munyao on Friday, said he reached the decision after consulting with residents on what outfit to vie with in the August 8 polls.

"I am back home and happy to be received because a time has come to remind Kenyans I am a staunch member of DP where is home for many," Machage said.

"I don't even know if there is a party called ODM ... naskia kimenaswa (it has been swallowed by NASA)," he added.

Munyao said the party will be fielding candidates in all positions in counties and constituencies.

"DP was formed 25 years ago. We have resolved not to merge with any other party. The party will be fielding of candidates in all counties and constituencies in the coming elections. We welcome aspirants to join our party and offer their candidature," he said.

The Senator has in the past

dismissed ODM leader Raila Odinga's threat to leave the party, saying he is still a member.

Machage who was the Kuria West MP for 10 years has been at loggerheads with the ODM leadership.

Raila once said the Senator adds little value to the party and it was only through negotiated democracy that the Senator earned his seat after losing out in nominations for the 2013 polls.

if he does not feel comfortable.

Post a comment
WATCH: The latest videos from the Star
by MONICAH MWANGI AND WILLIAM MWANGI @memwarwilliams
News
17 February 2017 - 12:00
Read The E-Paper