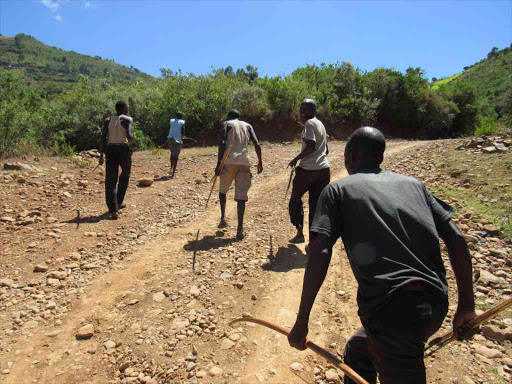 Section of over 500 Tugen youth armed with poisonous arrows on security patrols along the porous border of Baringo North and Tiaty sub-counties amid ongoing banditry attacks between Marakwet and Pokots in Kerio Valley Nov 08 2016. PHOTO/JOSEPH KANGOGO

A teacher was killed and his colleague injured when heavily armed bandits sprayed bullets at Kapindasum primary school in Arabal location, Baringo South.

on Wednesday as the children and teachers were leaving school.

Police have been deployed to pursue the bandits who escaped towards Pokot East.

He urged the government to help stop the bandits who were targeting to take over land occupied by the Tugen community.

“The attack took place as the children and teachers were leaving school to go home last evening and it’s a very unfortunate incident. It is so painful that they are now targeting schools,” said Olempaka.

Residents of the area said children who were at the school scampered for safety and many of them ran to hide in the nearby bushes.

Olempaka said it was now clear that the bandits were no longer interested in animals as was the case in the past.

“They now want to take over land in the area,” said Olempaka.

GSU officers were shot and wounded in fighting between herders from Pokot and Tugen communities in the Baringo South region.

torched in the clashes within Arabal and Muchongoi areas.

Hundreds of people have been displaced from the affected area.