South Sudan struggles to pay its troops amid cash crunch 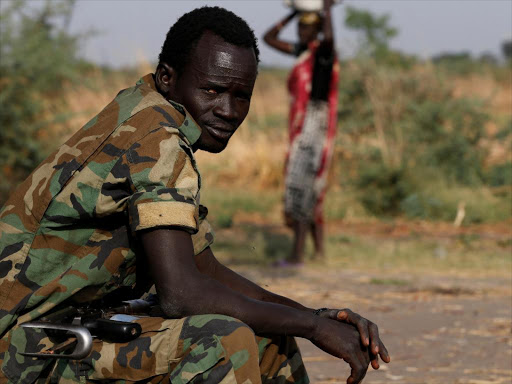 A soldier looks on near the town of Bentiu in Rubkona county, northern South Sudan, February 11, 2017. /REUTERS

Three years into a civil war and with inflation above 800 per cent, South Sudan's government is struggling to pay its troops. When delayed wages finally arrive, the cash is so devalued it barely buys food for a week.

Army wives have joined the lines of gaunt women queuing for food aid or cradling emaciated toddlers at hospitals in Juba, the capital, as soldiers prey on civilians or aid agencies. The government is losing its ability to rein them in.

"Sometimes there is food (at home) and sometimes there is not," said Rose Loru, a hollow-cheeked soldier's wife, as she dribbled fortified milk into the mouth of a skeletal toddler. Three of her children, weakened by hunger, died of illness last year.

Six years after independence, South Sudan only has only 200 km (120 miles) of paved roads in a nation the size of Texas. In Juba, hungry children cluster near potholes, waiting for passing jeeps to slow down so they can knock on the windows and beg for food.

South Sudan has been mired in conflict for decades, first as rebels fought the government of Sudan, when both countries were one nation, and each other. South Sudan won independence in 2011, becoming the world's youngest country amid ecstatic celebrations, but plunged back into civil war two years later.

The war pits troops loyal to President Salva Kiir, an ethnic Dinka, against backers of his former deputy Riek Machar, a Nuer.

The economy is in ruins. Conflict destroyed oil facilities, cutting output to less than half its pre-war level of 245,000 barrels per day and slashing government income. Inflation hit 830 percent in late 2016 and the currency has plunged. Now a third of the population needs food aid.

As desperation spreads, raids on aid warehouses have risen. UN officials say there were 71 looting incidents last year, up from 57 in 2015. The value of stolen goods was significantly higher than in 2015, they said.

Warehouses containing food rations, non-food items, educational materials and medical supplies in the regional states of Eastern Equatoria, Upper Nile, Warrap and Western Equatoria were looted in December 2016, they said. Many were in government-controlled areas.

The military families' stories and the raids on aid stockpiles show the quickening slide into chaos in a nation that the United Nations says is on the brink of genocide.

"You have to motivate soldiers. The current pay is inadequate. That is why we are having all these problems," said one former top military official, asking not to be named.

In Juba, seven of the 18 women interviewed by Reuters at hospitals or feeding centres were soldiers' wives. They would normally be more privileged than many in the nation of 11 million. Their husbands have permanent jobs, even if pay is often delayed. But even they have been pushed to the edge.

Delayed payments are nothing new in South Sudan, but wages used have far greater purchasing power. A soldier's salary is now worth a pittance in a nation dependent on food imports. Before the currency slide, a regular soldier's monthly wage of 611 South Sudanese pounds was worth $200. Despite rising to 1,060 pounds, it is now worth less than $10.

Even that is often not paid. Gabriel, a 38-year old soldier who asked that his full name not be used, did not receive his November or January wages. "I have three children, but I can't afford to pay for their food, let alone school fees," he said.

Bakhita Elia, 20, said her soldier husband hadn't sent money for five months. She was cradling a limp 16-month-old boy in dirty oversized pyjamas who weighed 4.2 kg, little more than a newborn. "We just live on greens and porridge," she said.

Diagnosed as "severely acutely malnourished", her son will only live a couple more weeks without intensive treatment. UN agency Unicef said 326,000 children were in that state by December, up from an estimated 170,000 at the start of 2016.

Soldiers are not the only government employees suffering. Teachers, nurses and civil servants also struggle.

A kilo of rice costs $1.20, beyond the reach of most. Traders used to selling sacks of beans now price them by the teacup. At a government hospital in the capital, unpaid nurses say they check their own children for signs of malnourishment.

Finance Minister Stephen Dheiu Dau said soldiers and civil servants had received small wage rises in the November budget, but he could not comment further on the military.

The government dismisses charges of widespread abuses by its soldiers and insists that in cases where indiscipline is uncovered, those concerned are prosecuted.

The Ministry of Defence and army spokesman Brigadier General Lul Ruai Koang did not respond to requests for comment.

"I fear we are reaching that stage ... where they (the soldiers) might disregard the government's instructions," he told Reuters, adding that aid was being looted increasingly frequently.

He was reluctant to apportion blame to any side, echoing the caution of aid officials who want to avoid charges of bias as they need whatever help they can get from the government.

"The phrase we use is 'men in uniform', we don't know which side. We accuse the government, the government denies it, of course. There are so many people in uniform and carrying guns," he said of a nation wracked by conflict for decades.

After renewed fighting in Juba in July, troops looted a UN World Food Programme warehouse, taking 4,500 tonnes of grain, as well as generators, trucks and other equipment.

"The government can't control or deploy soldiers as readily as it has been able to do," said Jok Madut Jok, a former culture ministry undersecretary who runs the Sudd Institute think tank.

The government was now directing limited resources to "a small group of die-hard supporters that it can rely on to protect the government", he said.

One security expert said favoured units such as the Tiger Battalion, a presidential guard largely staffed by Dinka soldiers from the president's home area, were paid on time.

A general in the army resigned last week, citing rampant ethnic favouritism towards elite units of mostly Dinka soldiers, and abuses by the military, accusing them of looting, raping and killing civilians.

"I can no longer continue to be part of the ongoing destruction of our beloved country by the same army," Lieutenant General Thomas Cirillo Swaka wrote in his resignation letter.