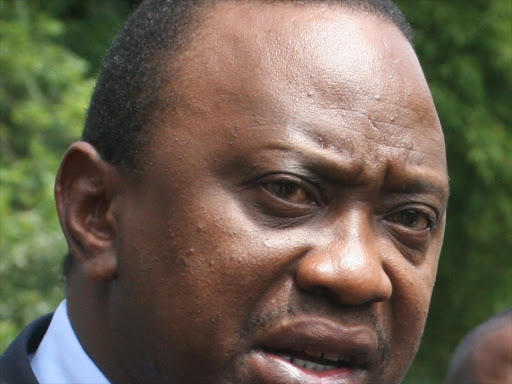 With only 175 days to Election Day, President Uhuru Kenyatta’s approval ratings have dropped by six per cent, despite his being the "most inspiring" leader, an Ipsos poll indicates.

The poll shows that though 66 per cent say they have confidence in the President, only 57 per cent approve of his performance in the last three months.

According to the poll, Uhuru’s performance approval ratings have dropped from 78 per cent in 2014 to 57 per cent this year.

This is however not the lowest score the President has had, having been given an approval rating of 47 per cent in another Ipsos poll – released in November 2015.

In terms of confidence levels, 42 per cent of respondents said they have a lot of confidence in Uhuru, this is compared to 28 per cent who say the same for Raila Odinga.

“Even among Opposition supporters, he wins more than twice as much of the highest confidence rating (“a lot of confidence”) than does Deputy President William Ruto," Ipsos leader researcher Tom Wolf explained.

Confidence levels for all the main Opposition leaders are considerably lower, but Raila has the highest.

This is about twice the level that it is for his nearest NASA colleague, Kalonzo Musyoka.

In the poll, 35 per cent of those sampled were of the opinion that the Head of State performed poorly in the last three months and a paltry 8 per cent had no opinion.

Those who have approved of the President’s performance over the last three months attributed it to infrastructure (41 per cent), improving the education system (14 per cent), the economy (11 per cent) and combating corruption (seven per cent).

Those against Uhuru’s performance cited abetting corruption (46 per cent), the economy (18 per cent), labour relations and strikes (eight per cent) and poor infrastructure (5 per cent).

Interestingly, the President’s performance seemed to be acknowledged even in areas that are believed to belong to the Opposition.

“So when you see Jubilee leaders go vote hunting in some of these strongholds that supposedly belong to the Opposition, even without our data they may think they have an argument, so we can see that there is some potential,” Wolf said.

Wolf said that almost half of those who approved the President’s performance feel that the country was heading in the right direction.

On the other hand, those who disapproved of the performance, 84 per cent, said that the country was heading in the wrong direction.

The data also show 81 per cent of those interviewed said that Uhuru was responsible for the country heading in the right direction.

However, 59 per cent said that he should be blamed if the country is heading the wrong direction.

“We wanted to know how could people think that the country is heading in the right direction and still approve of the President’s performance?” said Wolf.

The high cost of living (22 per cent); corruption (21 per cent); lack of employment, (17 per cent); and the ongoing drought (14 per cent) were some of the problems that Kenyans said they face.

Among Jubilee supporters, 24 per cent also identified corruption as a major problem in Kenya, compared to Cord's 20 per cent.

Twenty-one per cent of Jubilee supporters mentioned the high cost of living, 17 per cent said hunger and drought were a problem and only 13 per cent identified unemployment as an issue.

Post a comment
WATCH: The latest videos from the Star
by RHODA ODHIAMBO ,@OdhiamboRhoda
News
14 February 2017 - 02:00
Read The E-Paper