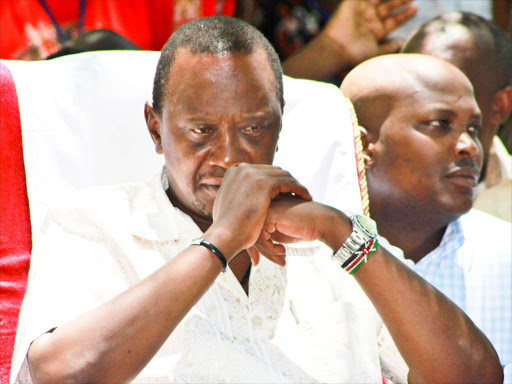 Kenya has been ranked one of the most corrupt countries in Africa and on the globe.

Kenya attained a below average score

"Kenya, despite the adoption of a few anti-corruption

including passing a law on the right to information, has a long way to go," read the report.

It noted that President Uhuru Kenyatta

may need "new strategies as Kenyan citizens go to the polls in 2017".

officials over rampant corruption saying the situation was frustrating.

"Corruption is frustrating me. The pressure is on me to do something about corruption but my hands are tied," he said.

over the failing war on graft.

Burundi was ranked 159th with 20 points and

last was Somalia at position 176 with 10 points.

Globally, Denmark and New Zealand were found to be the least corrupt countries with scores of 90

while Somalia and South Sudan were the most corrupt.

The graph below shows countries scores and rankings.

The report noted that

that were found most corrupt are

plagued by untrustworthy and badly functioning public institutions like the police and the Judiciary.

"Even where anti-corruption laws are in the books, in practice they're often skirted or ignored," it stated.

The report added that in these countries, people are often in situations that include bribery

African leaders who come to office on an “anti-corruption ticket” will need to live up to their pledges.

The report said they must implement their commitments to the principles of governance, democracy and human rights.

These include strengthening the institutions that hold their governments accountable and electoral systems that allow citizens to either re-elect them or freely choose an alternative.

tend to have higher degrees of press freedom,

about public expenditure, stronger standards of

But TI said these nations can afford to be

"While the most obvious forms of corruption may not scar citizens' daily lives in all these places, the higher-ranked countries are not immune to closed-door deals," the report stated.