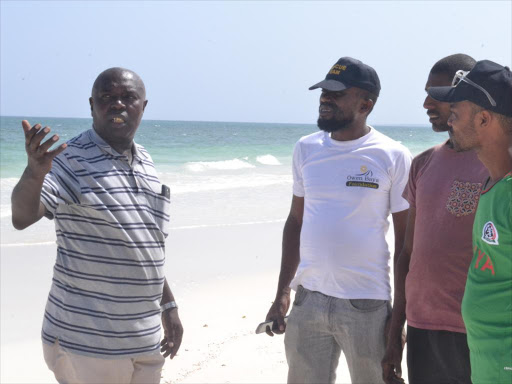 Mada hotels GM Peter Njoroge (left) with some officers from the County Sea Rescue Team at the site where German tourist Anderseck Gunter was found dead on January 8, 2017. /ELIAS YAA

A German tourist on holiday in Kilifi has been found dead.

Anderseck Gunter, 66, is believed to have drowned at the Kilifibay beach resort private beach on Sunday morning.

His body was found floating about 500 metres away from the hotel, which he had been staying in since last Monday.

Mada hotels Kilifi GM Peter Njoroge, said the deceased left his hotel room at around 6am as his routine to go and swim at the beach.

Njoroge told journalists that at around 9am he received a phone call that a visitor from his hotel had been found dead at the shores of the hotel.

“Since his arrival at the hotel, Gunter had formed a habit of going to the beach very early in the morning to swim. That is what he did today but as fate would be, he drowned," Njoroge said.

"When I went to the scene after the call I identified him through the all-inclusive hotel’s arm band. He arrived at the hotel on January 2 and was to return to Germany on January 22,” he added.

He said the deceased went to the beach bar, left his towel and slippers before heading to the ocean for swimming.

Mada Hotels GM Peter Njoroge show's journalists where a Germany tourist Anderseck Gunter left a towel and slippers and went to swim in the ocean where he drowned, January 8, 2017. /ELIAS YAA

Njoroge said it is yet to be established how Gunter met his death because he was alone at the beach.

He said that he called the police and officers from scenes of crime who arrived at the hotel and checked on the body.

Kilifi OCPD Alexander Makau said investigations are underway, adding that a postmortem will be conducted on the body.

“For now I can confirm to you that initial investigations have shown that Gunter drowned but we shall have the full information after the postmortem report is out,” he said.

The officers he said they later combed the visitor’s hotel room where they found a bottle of whisky and some medicines.

“The bottle of whisky was half full so we don’t know whether he had taken it last night or in the morning before heading to the ocean. That we cannot confirm. For us this is an isolated case and I want to assure the public that the hotel is safe. We have not had any other incident like this,” Njoroge said.

“We have informed all his family members in Nairobi, Mombasa and in Europe. This client did not have any history of any disease. In fact he was very jovial to every person at the hotel and cheered with everyone until his death,” he added.

His body was taken to Pandya hospital mortuary in Mombasa.