Why Chiromo is not accepting fathers DNA 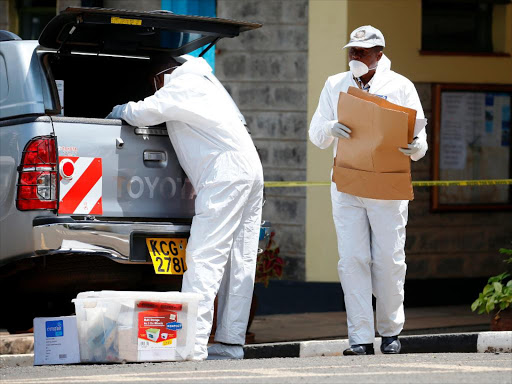 Officers from the DCI leave the Chiromo Mortuary on December 13, 2016 after collecting samples for DNA in an effort to Identify the victims of the Karai road tragedy to their relatives. /JACK OWUOR

Is your father really your biological father?

Is your child really your biological child?

The spectre of dubious paternity now haunts the Naivasha road tragedy in which 43 people died, mostly incinerated in a fireball on Saturday night.

Because most were burned beyond recognition, the state must use DNA for identification.

But fathers' samples are being rejected as less reliable.

The state has bypassed fathers and is only testing DNA from mothers, brothers and sisters to identify remains.

Autopsies and DNA testing will take at least two weeks to a month and funerals will be delayed, except for those who died in hospital and whose families are known. Their DNA will be collected and tested.

Mothers' DNA is most reliable and avoids the possibility women have borne children to men they have not married — and not told the truth.

Chief government pathologist Johansen Oduor yesterday said the decision was made because the only biological parent Kenyans — or anyone — can be sure of is the mother, and many men could be raising non-biological children.

“The only person you are certain of is the mother, unless the child was swapped at the hospital. And there is the factor of men raising children they have not sired, which is not isolated ton Kenya. It happens the world over," Oduor told the Star.

He said also fathers’ specimens does not guarantee exact results.

Oduor said the DNA passed from mother to child is critical in pathology and that's why the state insists on using mothers' and siblings' DNA.

The 43 died in the December 10 tragedy after a lorry carrying a flammable chemical rammed other vehicles, creating a pileup and exploding into a fireball that engulfed 14 vehicles.

Yesterday, the government held a memorial ceremony in Nairobi for the victims.

But the DNA decision is bound to cause anxiety

Oduor said the mitochondria from mothers are found in bones that pathologists will study, as most of the flesh has been burnt.

“Mothers' specimen are more reliable because of specific features only shared between the mother and child," Oduor said.

Leading geneticist, University of Embu lecturer Dr Njiru Nthakanio, concurred with Oduor. He told the Star some of the father's mitochondria die at fertilisation. He said some DNA is only shared between mother and child. Only nuclear DNA is shared by father and child and does not yield the best results, the geneticist said.

"Mothers' mitochondria are most likely to give perfect results. The problem is with older people whose parents can't be found. Then the only option is siblings," Nthakanio said.

Victims who died in hospitals must also be DNA-tested, samples will be collected, although their families can bury them.

"Obtaining the samples is the beginning. We hand them over to the government for duplication and other processes," Oduor, saying identification could take a month.

Except for one officer buried immediately, the 42 others will be DNA tested.

Kigotho said even families of the 11 GSU officers, whose requiem mass was held at State House yesterday, must await identification before burial.

Six GSU officers have been moved to the Kenyatta University Funeral Home.

Yesterday pathologists were awaiting bodies of three people who died at Kenyatta National Hospital and the Nairobi Hospital before closing the operations at the Chiromo Mortuary until autopsy and identification are complete.

"Operations there will stop after two weeks," Kigotho said on phone.

Kigotho said burials can proceed for those who died in hospital, though DNA will be texted.

One person is responding well to treatment at KNA.

Oduor's team is working with government chemists and the DCI.

Families complain the exercise is going too slowly and want more pathologists and geneticists assigned.

"DNA is not something that can be done in two days. It is going on well and the families should be patient," Kigotho told the Star on the phone yesterday.

One body is claimed by two families.

DCI homicide detectives went to Naivasha yesterday for further investigations. They will get more details from Naivasha police.

Paternity costs are the cheapest. The government chemist charges Sh5,500 per person, Sh10,000 for one parent and one child.

The cheapest private provider charges Sh20,000, with results in two days. It may take five to 10 working days for complex cases.

One Nairobi centre, the easyDNA company at the KMA plaza in Upper Hill, charges Sh24,000 for one paternity test.

“This includes testing of alleged father and one child. Further people can be included in the test fora small added cost,” the company says.

“We can carry out paternity DNA analysis with or without the mother's DNA sample. Even without the sample of the mother, we provide a result with a probability of paternity above 99.9 per cent. If the mother is included the paternity test result will have an accuracy of over 99.99 per cent."

The company says it has carried out more than 300,000 DNA tests, on 21 genetic markers, the minimum accepted standard for DNA analysis, and ensures more reliable results.

According to the Bioinformatics Institute of Kenya, another DNA testing company in Embakasi, a 26-marker test costs Sh10,000 per person, a total of Sh20,000 for alleged father and one child.

The test is based on the fact that 50 per cent of a child’s DNA is inherited from the father and 50 per cent from the mother. This test provides a high statistical strength and is superior to DNA tests used by most law enforcement labs.The more accurate 41-marker test costs Sh15,000 per person, a total Sh30,000 for alleged father and one child.

Most DNA samples are collected using oral swabs, which are quick and easy to use.

The US Embassy in Nairobi conducts the test as well as Kenyatta National Hospital.