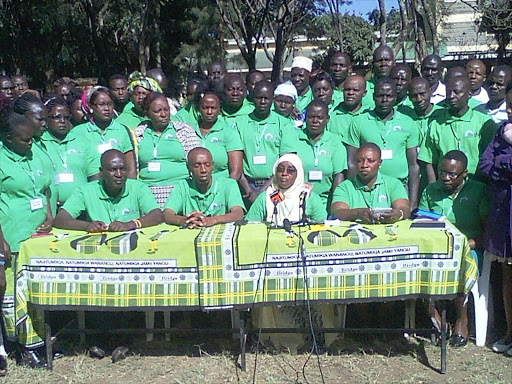 Sossion, who is Knut secretary general, demanded the closure of low-cost academies saying they were a profit-making venture.

He said the schools were informal but operated like private institutions and noted that the 405 of them charge children Sh600 a month.

But Phillip Origi, national chair of the Association of Parents, said: "We adhere to the law but there are cartels which are not happy and are out to mess up our centres."

"We are appealing to Sossion to withdraw the statement he made against our schools," he added during a press conference in Nakuru on Thursday.

Hadija Abduda, Bridge Parents Association chairperson, said the schools have ensured quality education by following the 8-4-4 system to the letter.

"Our teachers are TSC-confirmed and the subjects we offer are up to standard. We are here to ensure quality contrary to what Sossion stated," she said.

The Kenya National Union of Teachers boss said the schools were not committed to improving the country's standards of education.

Celestine Tabu from Busia county said Sossion's claims will only cause the schools to suffer.

"It was a big blow to parents. I would like to ask [Education CS Fred] Matiang'i to save us from such propaganda and criticism," she said.

He added that the schools have been complementing the government's efforts in ensuring quality and affordable education.

Sossion has criticised the schools saying they have not met the threshold of government regulations and UN resolutions guiding their establishment.

"The ministry of education has confirmed that bridge is operating illegally and against UN fundamentals," he said at an education innovation conference in June.

"Matiang'i should crack the whip on them. He should outsource public education to Bridge," he added.

He also said the schools were yet to fulfill the mandate of ensuring children in slums access quality education.