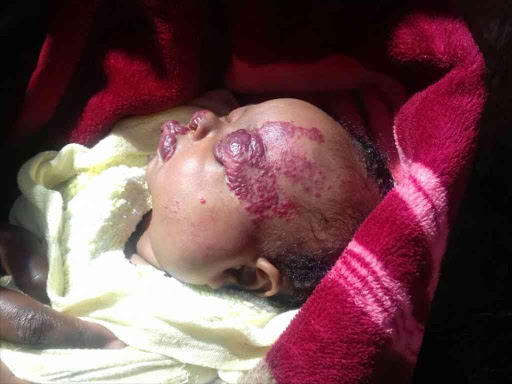 A two month old baby suffering from haemangioma, her mother is appealing for help to raise SH2 million for her treatment

A two month's old baby in Samburu is in urgent need of Sh2 million for treatment of a "strange diseases" that has shocked residents.

A doctor at Samburu county hospital referred Eunice Letoluai’s baby to Kenyatta National Hospital for treatment saying she has shown signs of haemangioma.

A haemangioma is a collection of blood vessels that form a lump under the skin; it's often called a 'strawberry mark' as it looks like the surface of a strawberry.

Superficial haemangiomas are usually raised red areas of skin, which feel warm because the blood vessels are close to the surface.

Letoluai is appealing on well wishers to

help her raise the money needed for her baby's treatment.

The single mother and a standard eight dropout relies on casual jobs to earn a living.

“I call upon anyone to come and help me. I can’t imagine loosing the firstborn baby in my hands,” she said at her parents’ home.

According to Letoluai, her baby developed a sore red pimple two weeks after birth, which later developed to large watery pimples.

Letoluai was helped by a well wisher and her parents to take the baby to Samburu county referral hospital where she was admitted for two weeks and later discharged without treatment following health workers strike.

“As you can see the pimples have now grown bigger and have spread across the face. If I breastfeed, blood oozes from the baby’s mouth,” said the mother.

Letoluai and her parents are having sleepless nights to comfort their ailing baby from pain.

“I spent most of my time in forest burning charcoal to earn money that is not even enough to buy food for my seven little children. I am left with no money I can spend on the treatment of our granddaughter,” said Letoluai's mother.

“A baby can be born with this disease or the symptoms can be visible after two to three weeks after the date of birth,” doctor

He said the disease is not common in the country saying a single child among 1000 children could be suffering from the disease adding that if untreated, the disease may lead to heart failure.

Post a comment
WATCH: The latest videos from the Star
by MARTIN FUNDI @martinfundi
News
13 December 2016 - 15:00
Read The E-Paper