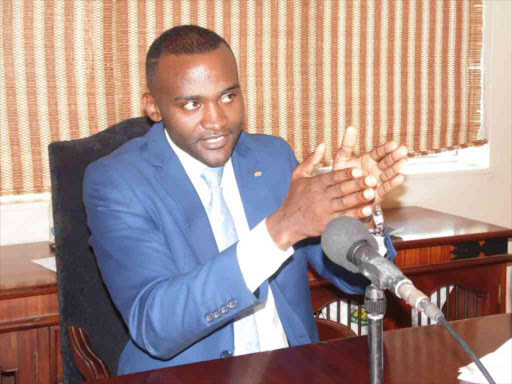 wants to move Kenya's capital to Isiolo, away from corruption cartels that "have taken over Nairobi".

Cliff Mboya on Friday said he will move State House away from "graft saturated city".

He said the Vision 2030, Kenya's economic growth blue print proposes that Isiolo should be the Kenya's administrative capital.

"We will roll out immediate plan to move State House to the new capital as proposed in the vision 2030 agenda. We will nominate our cabinet secretaries before assuming office and they will be known to the public," Mboya said.

Mboya said once he takes over the country's leadership, he will order fresh investigations into all corruption cases by "patriotic and independent people" to ensure the evidence gathered is tight enough to secure convictions.

The aspirant said he will make graft related offenses punishable by mandatory death sentence to deter those intending to loot public resources, and recover all stolen resources from the convicts.

"Corruption has robbed off a huge amount of treasures from generations. Its days are numbered. The writings are on the wall for those politicians, public servants and private sector practitioners who can see and decipher it."

"It is an endemic that must be dealt with categorically. My Agenda number one is to pass a Bill to add a clause that will extend death penalty to any individual charged in court for corruption related cases," Mboya said.

Mboya spoke at Nairobi hotel during a strategy meeting with his advisers to form a campaign team.

He said the corruption cartels have besieged Nairobi and the country's top leadership as well, and he will move the administrative offices to the resort town, "for fresh beginning".

Anyone with huge sums of money has to account for the source and reasons for holding such huge amounts with them, he said.

He said he will focus on empowering people so that they can afford a peaceful atmosphere to build their country's infrastructure and also push development agendas.

"Today, if our forefathers would rise from their death beds, they would die again of heart attack and shame. Our social problems have significantly increased out of greed, poor leadership and lack of role models leading to erosion of moral fabric of our society," Mboya said.

"The ongoing robbery and political subjugation from our "new colonial political class" is life threatening and it is only important to rise up against such injustices to bring sobriety to this nation before we disinherit ourselves of birth right as citizens."

Mboya said he will lead the coalition of willing citizens to bring changes in the country and will vie as an independent candidate.

He said volunteers in the "willing force" will go door to door to woo Kenyans to support his bid.

"Together with others from this coalition of the willing citizens, we shall set new record by changing the narrative in our politics. A new narrative that leaders give more than taking," he said.

Mboya said he has more than 10 years of experience working directly and indirectly with small and medium enterprises focusing on entrepreneurship.