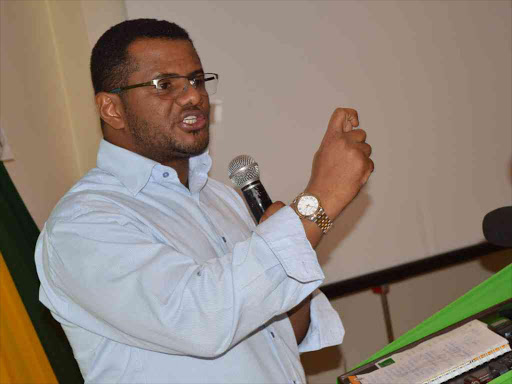 has asked East Africa Community leaders to push for common standards in the fight against dictators and looters.

should focus on common

values and standards of democracy to end vices in the region.

"You cannot, on one side, say you come from a certain country yet know the looting or vices that your President is perpetrating, but do nothing about it," he said in Mombasa on Wednesday.

"Issues like passports and common markets can work out without much hustle but common integration cannot."

Omar, who is eyeing the county's governor seat, congratulated the Kenyan government for allowing freedom of expression by leaders and warned that the country will not associate with leaders who do not observe this.

"We will not integrate with leaders who stifle free speech, punishing the opposition or throwing opponents in jail. Let us not play soccer over skeletons and post election violence," he said.

"In Kenya you cannot punish the opposition or jail them and that is why MPs are happy. Nobody shall arrest me after this and that is what we want across the region."

Several Kenyan politicians were arrested and charged earlier this year with inciting violence.

They denied the charges and were released on bond.

Post a comment
WATCH: The latest videos from the Star
by WILLIAM MWANGI @memwarwilliams
News
07 December 2016 - 12:00
Read The E-Paper