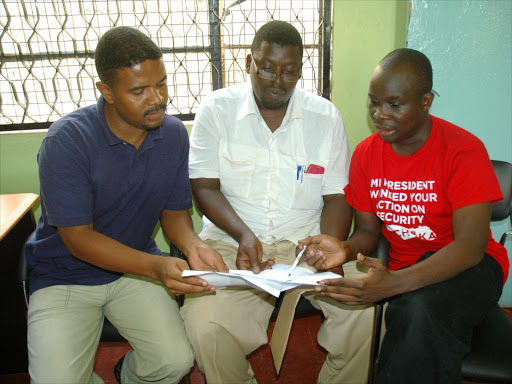 Saada Juma, 35, breaks down occasionally as she narrates the frustration and pain she has been through in search of her husband who went missing in the hands of police officers.

She was glued to her TV set much like any other Kenyan on February 2, 2014, to catch a glimpse of a police raid at Masjid Musa in Mombasa.

“I saw my husband Hemed Salim, unlike other people who were being bundled in a police lorry, isolated and put in a police Land Rover which had some police officers,” she says.

“That was the last time we saw him, and our searches at police stations and morgues have never yielded

fruit. The pursuit of justice through judicial means has also been frustrating."

She adds that they have struggled to fend for themselves and that it is extremely traumatising to give their three children an explanation.

"It better you live with a grave than a missing person,” she adds.

Saada's family is among 81 at the Coast that have had to endure the anxiety and pain of living with memories of kin who have gone missing.

Residents have accused police of executing and subjecting them to forced disappearances amid heightened security operations.

In a report titled 'What Do We Tell The Families?', released on Wednesday by Haki Africa, the rights group

details 81 cases of killings and disappearances at the Coast between 2012-16, it what it terms an epidemic.

The group said it compiled the cases after investigations that presented compelling evidence.

includes 22 deaths due to excessive use of force by police, and four while the victims were in police custody, 31 cases of extrajudicial executions and 24 of enforced disappearance.

Hussein Khalid, Haki Africa executive director, said most victims were youths and that all of them were Muslims suspected to have been terrorists.

“We often asked why people should care about the killings of people described as a terror suspects. The label,

although frequently deployed by security agencies, is increasingly nebulous and ill defined," he said.

"In the minds of authorities and police already prejudiced against certain communities, suspicion is often not the neutral or objective term."

failure to offer just and legal means of redress for victims and their families leaves them vulnerable to recruitment to terror groups, which are quick to offer solace for victims perceived to be state excesses.

"Coastal communities are increasingly caught between two fires; the violence meted out indiscriminately by security agencies, and the threat of extremists against those who don’t share their views," he added.

Macharia Njeru, chairman of the

termed the cases real, serious and deserving of acknowledgement by all players in the security sector if a solution has to be found.

"Police must become professional and increase community engagement. Its not enough to say lofty things on police transformation whereas their action speaks the contrary," said the chairman who received the report.

"The tone, to stop use of extralegal means in dealing with insecurity, should be set by the top command within the police service, if we are to bring to an end this culture of collective punishment and violation of

But when he took to the podium Murshid Abdalla, a National Police Service

commissioner, defended police arguing the cases were isolated and by individual officers.

Abdalla said the cases were

not rampant, systematic or sanctioned by top security officials as documented by human rights groups.

But he could not satisfactorily answer questions on the specific actions they have taken to investigate the cases or hold those responsible to account.

"If you want to go the route of a debating society, I wont be part of it," he said when pressed to state measures against the "few rogue officers" he had spoken of.

The report adds to the number of documents that puts a spotlight on the country's human rights record.

In 2014, the Independent Medico-Legal Unit recorded 199 cases of extrajudicial killings, and 97 by October 2015, including 85 summary executions perpetrated by polices and the Kenya Wildlife Service.

Eleven deaths of people, last seen in state custody over links to ,

were also recorded for the last eight months.

The involvement of multiple units and lack of investigations indicated they were more than simply the work of rogue officers.

In the first response to increasing cases of executions of suspects in the hands of police, Interior CS Joseph Nkaissery termed the allegations unsubstantiated, given in bad faith and aimed at undermining police efforts in crime control.

Nkaissery said in October that

the government was aware of a conspiracy to undermine the "excellent" work of the police.

Post a comment
WATCH: The latest videos from the Star
by By Ramadhan Rajab, @Rrajab
News
07 December 2016 - 15:00
Read The E-Paper