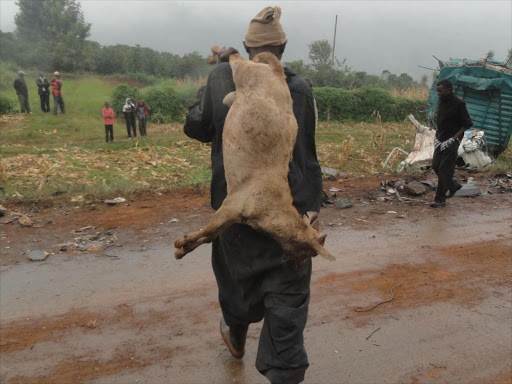 A file photo of a man walking away with the carcass of a sheep he collected from the scene of an accident on Karatina- Sagana highway. /WAMBUGU KANYI

Seven people were admitted to Samburu County Referral Hospital on Sunday morning after slaughtering a sick sheep and eating its meat.

Victim Ian Lepaske said: "We decided to slaughter the sheep since it was dying of a unknown disease."

"We have been eating dead sheep, goats and cows but have never fallen sick."

Ian Lepaske, one of the seven people who ate meat from a sheep's carcass, at Samburu County Referral Hospital, December 4, 2016. /MARTIN FUNDI

Duke Mogaka, a medical officer at the facility, said the patients were from Sagumai area.

"We are trying to stabilise two patients who are in severe condition," he said, adding the others were stable.

He asked area public health officers to sensitise them.