MP aspirants must have degrees before 2017 general election 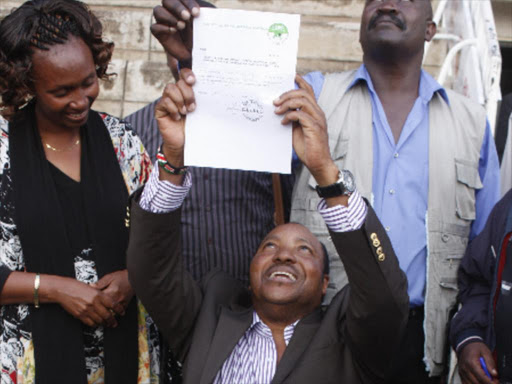 A file photo of Kabete MP Ferdinand Waititu holding up his certificate after he was cleared by IEBC to run in the 2013 general elections. /CHARLES KIMANI

Aspirants for seats in Parliament in the next general election will be required to have a university degree.

MP passed the far-reaching provisions in the Election Laws (Amendment) number 3, Bill 2015, making it also mandatory for MCA aspirants to have at least a post-secondary diploma.

The law may bar several aspirants who want to run for the coveted seats in the August 2017 polls but are yet to go to class. This is unless transitional clauses are put in place.

And with tough ministry of education guidelines enhancing vigilance on politicians in class, those seeking elective positions without the required level of education.

The Bill by the Justice and Legal Affairs Committee sailed through Third Reading and will have to be sent to the senate for input once it sails through third reading when MPs come back from recess.

The House adjourned until February 7, 2017 when they resume the Fourth session.

The Bill also increases the number of voters in a polling station from 500 to 700.

It was passed in September after a protracted political negotiation had set the number of voters in a polling station at not more than 500.

This increased the total number of polling stations by 13,000 raising the total cost of election by over Sh10 billion.

IEBC had warned that there are no enough public facilities to facilitate the additional polling stations.

The law requires polling stations must be demarcated in either a hospital or school and any other public facility.

Under the amended law, those wishing to be nominated as members of the county assemblies must have a degree from a recognized university.

Initially those seeking election as MPs needed to have at least a certificate earned after studying for at least three months in a post-secondary school institution.

When the Act was being prepared in 2011, affected MPs successfully lobbied then-President Mwai Kibaki and then-Prime Minister Raila Odinga to have those contesting in the 2013 elections exempted from that requirement.

Only the President, the Deputy President, governors and deputy governors are required to have degrees from universities recognised in Kenya, as a basic requirement