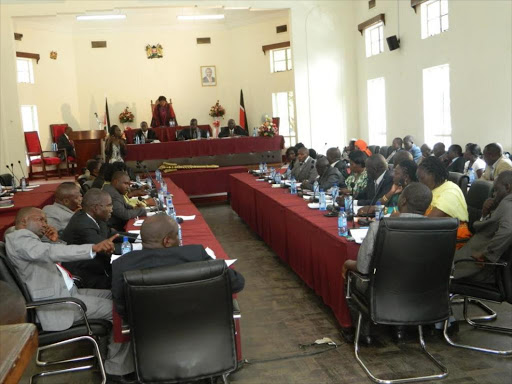 It further revealed that seven MCAs were paid at a higher rate that is applicable to chairpersons or vice chairpersons of committees, resulting in an excess payment of Sh421,200.

November 2014, a total of Sh587,340 was paid as sitting allowances to 34 MCAs who attended a workshop on effective legislation in Nakuru.

Ouko noted that the allowances were not defined by the standing order.

He added that Sh510,000 was paid to the leaders of majority (Samuel Ong'ow)

Another Sh363,200 catered for meals for officers attached to those offices as personal assistants. But this is not covered in the Salary and Remuneration Commission Circular, noted the Auditor General.

The report further indicated that on

to all members including speaker Ann Adul.

Ouko said no proper reason was given for payment of the allowances as members were only entitled to sitting allowances during the plenary.

October 2014, five MCAs were paid Sh240,000 for accommodation allowances during an agricultural conference in Nairobi.

Ouko said the same MCAs had signed the attendance register at the plenary and received their sitting allowances.

The assembly is also on the spot over the procurement of air tickets. Records availed for review revealed that the assembly directly procured air ticketing services and paid a local firm Sh8.3 million.

“(This) did not comply with Public Procurement and Disposal Act 2005,” noted the

Ouko noted that the management has not explained the rationale for the direct procurement.

The audit further queried rental services for the speaker’s house where Sh1.1 million was paid to a supplier without due process.

In the documents availed for review, there were no documents showing how the services were procured.

But there was no proper documentation provided to support the travel.

Ouko also noted that the management has not instituted the recovery of the irregularly paid funds.

For all county audit stories visit the